Leona Lewis conquers the world: she was the fourth British woman to reach number one in the US chart.

She is on top of them all: with her exciting song 'Bleeding love' Leona Lewis, 23, jumped to the top of the American Billboard charts. With that, she is the fourth British woman after Kim Wilde, Sheena Easton and Petula Clark who managed to do this. Who would have thought this of a former pizza saleswoman from Hackney who debuted at the British casting show 'X Factor' and won? One person did: Simon Cowell. The music producer, feared for his harsh critics during the show, knew from the start: 'Leona has the marks of an international superstar'. He gave her a contract - and turned out to be right. First Leona Lewis won over Britain with her voice which resembles Whitney Houston, Mariah Carey and Celine Dion. Then the rest of Europe, and now America and Australia. Until now she has reached number one in ten different countries, but still lives in London in a rented house with her boyfriend. Being famous without moving out: that goes well too. 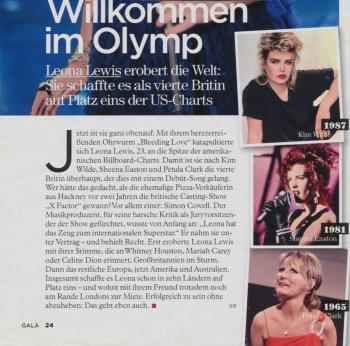