Politicians and garden experts back IoS campaign to get pupils planting

Children will be more adventurous over what they eat if they've helped to produce it, writes Paul Bignell.

Leading gardening experts have joined hundreds of schools backing The Independent on Sunday's Let Children Grow campaign, which aims to get primary pupils cultivating and enjoying their own food. Some 425 schools, roughly 85,000 pupils and high-profile figures ranging from Alan Titchmarsh to David Cameron and Kim Wilde have called for more children across the UK to be given the chance to grow their own vegetables.

Titchmarsh, one of the country's most famous and distinguished gardeners, praised the campaign, saying how important it was for children to "see things growing they can actually eat. Children today are so disconnected from the food they eat and from the life in their gardens, especially in towns and cities - but it doesn't take much to reconnect kids with these things."

Similarly, the TV presenter and singer Kim Wilde, also an award-winning gardener, said: "The Let Children Grow campaign is not only great for children, but is a vitally important contribution to society; after all, these children are the future caretakers of the very planet we have taken so much for granted."

The campaign, launched two weeks ago, working with the Royal Horticultural Society, aims to encourange primary school children to enjoy the benefits of growing and enjoying food. Schools up and down the country will gain from children spending more time outdoors, as well as improving their environmental awareness and knowledge of nutrition.

Schools that sign up are being encouraged to create raised beds, allotments or window boxes if they are short of space.

Other backers include the Conservative leader, David Cameron, who said: "Gardening is a great way for children to spend time outdoors learning about plants and where food comes from". Boris Johnson, the London Mayor, is also among the supporters: "I encourage schools across the capital to join in and applaud the IoS for championing the cause across the UK." Lembit Opik, the Lib Dem MP, added: "Once again, the IoS is achieving a campaigning first. I regularly go to primary schools in my constituency, and it's obvious that if you involve [children]  early, these skills will stay with them for the rest of their lives."

Carol Klein, a gardening expert and TV presenter, added: "Any initiative to get children growing stuff is splendid. Everyone should get behind such an idea. It doesn't have a downside and can do nothing but good." Bob Flowerdew, an organic gardener and TV and radio presenter, said: "I'm involved with several schools near me, and I think it's a worthy cause." Bunny Guinness, a chartered landscape architect and journalist, added: "Getting children playing and gardening is brilliant, as it allows them to interact and communicate with each other."

Sarah Beeny, a property developer and TV presenter, said: "It teaches children to defer gratification and lets them understand the importance of doing something today and waiting for the results." She was joined by the TV presenter Charlie Dimmock: "When I was at school, everyone had gardening lessons. This is a wonderful initiative to give children the chance to experience what I loved so much."

Pippa Greenwood, a plant pathologist and presenter, said: "Being in the garden is an amazing, exciting and yet safe child for any child to be. If you can encourage kids to grow their own food, you'll be amazed at the things they'll eat which they wouldn't otherwise." And the chef Antony Worrall Thompson added: "To help get children interested in their own health and nutrition, we need to help them understand the journey of food from field to platye. No matter how small your gadern, a good way to start is with hanging baskets or a window box with sweet cherry tomatoes."

The IoS is this week giving away a free packet of seeds, in partnership with Homebase, to every reader. 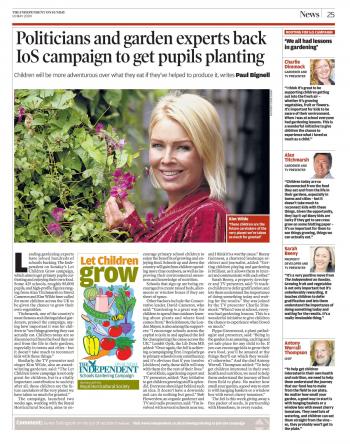