Wilde by name but certainly not by nature sums up singer, song-writer and gardening expert Kim Wilde. Contented, for a time, to simply be a wife and mother, she’s thoroughly enjoying the fact that she can now have her cake and eat it. With encouragement from her family, Kim is about to start rehearsals for a new solo tour in March and another Here And Now Tour which sees seven artists performing music from the eighties at the M.E.N Arena.

"I’m getting really excited about that," laughs Kim. "The eighties was such a great decade for music and particularly for me. It was certainly a more carefree, affluent time and this tour has such a terrific line-up. We’ve got Hazel O’Connor, Kid Creole And The Coconuts and Brother Beyond, whom I don’t really know, but it’s also a great way to keep in touch with old friends like Howard Jones, who’s a real gentleman and Altered Images, whom I’ve not seen for ages – and the fans, of course!"

Boy George's billing on the tour hangs in the balance as his case comes to court soon. But Kim remarks: "George is musically a national treasure and we should all try to remember that. But I'm personally looking forward to this tour because big arenas are fun to play and when there are other musicians around there’s a real sense of camaraderie as we sit up late at night, drinking soup and reminiscing about the old days."

Music has always been around the Wilde household. "When dad was working hard, and we didn’t see much of him, I never resented being the daughter of a famous heart-throb like Marty Wilde. Of course, it seemed a bit weird when friends at school asked for his autograph but my brother Ricki and I were both mad about music and started writing songs on our synthesiser. When dad was at home we'd all write together and then, when Ricki became successful, I ended up writing by myself."

Kim's rise to fame seems meteoric until you remember her musical background and, although she admits to having the best possible start, she didn't have a hit just because she was Marty Wilde's daughter.

"Initially, it was easier for me to get noticed because of dad's connections but that brought its own pressures because you had to be good. But you don't sell records just because your dad's famous – it has to be a good song and, although I knew that, I had to grin and bear it."

There’s no doubt that Kim’s music, mostly written by her dad and brother, plus her appealing blonde looks, made an attractive package for the record industry and she caught the attention of famous record producer Mickey Most who was responsible for her initial record success. The 'pop princess,' as she was labelled, went on to sell 20m singles and 10m albums.

Kids In America, issued in 1981, was Kim's first major hit. It made the number two slot here but also took her into the American market, albeit in 25th position. More hits followed and Kim was invited to support Michael Jackson and David Bowie.

"Although I had hit records, I had no real act as such, so we had to work hard at achieving that and dad was supportive throughout. I was so excited because I was born in 1960 and had grown up listening to Jackson and Bowie and here I was supporting them. Although they were surrounded by various entourages and I didn’t get much chance to talk to them, I was just thrilled to be there."

Kim’s recording career was going well with Chequered Love achieving another number two slot with Cambodia just missing out on the top ten at number 12.

But she was back with You Came at number three, which she co-wrote with her brother. Four Letter Word made it to sixth place with the cover version of You Keep Me Hanging On achieving massive success in America reaching the coveted number one slot in 1987.

"Breaking into America was huge. Many other more experienced performers had tried and failed but I think when you are young and fearless you don't realise that it's such a big a deal."

Since then, there have been other hits for Kim like View From The Bridge, Never Trust A Stranger and If I Can’t Have You.

Although Kim gave up her career in 1996 to have a family, it's a decision she hasn't never regretted.

"The timing was right. I think people forget that I was quite young when I started and I'd worked hard for 15 years. I met my husband, Hal Fowler, when we were in the musical Tommy together and married in 1996."

While Kim was at home having the children, she became involved in gardening. "I was brought up in the Hertfordshire countryside with woodland on the doorstep. It was an idyllic spot for children and it made a big impact on me growing my own vegetables to show at the village fete, feeling part of the community and enjoying life. Hopefully, I've passed that on to my own children. I took an agricultural course and started writing gardening columns for newspapers and several magazines. I also wrote a couple of gardening books as well. It was fun being asked to present the TV gardening programmes but I did it for the love of gardening, not just to get on the telly."

After a five-year break, Kim decided to dip back in the music scene. "I did it gradually with shows like Here and Now, which was making an impact in the big arenas. Dad found that the nostalgia value was attracting a younger audience as well as the die-hard fans so I thought I'd also give it a try. It was gratifying to discover that the fans hadn't forgotten me. I started recording again and I enjoyed it so much that I did a solo tour, which had a terrific response in Europe. A couple of years ago I did the biggest solo tour of my career returning to Europe and going to Russia. That proved so successful that there'll be another new album this year. But Manchester is still special. I've been coming here for years to promote my music and we've always had a wonderfully warm reception."

Now that the children are older, Kim worries less about leaving them.
"Their dad's there most of the time when he's not working and my dad loves teaching them to play music. He started with the ukelele and now Harry’s 11 and is a really good guitar player whilst Rosie is nine and sings well. So, you never know, it may be history repeating itself again."

Kim’s proudest moment? "Well, musically it would have to be my first hit, Kids In America but, and I know the fans may find this strange, but being awarded gold at the Chelsea Flower Show, still remains my proudest achievement. Gardeners will know exactly what I mean." 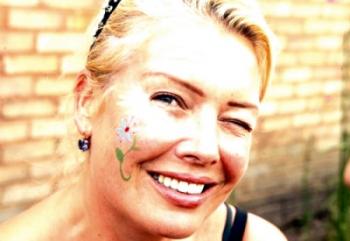