The Eighties are back - and bigger than ever

t was the decade of throwaway synth-pop and fashion faux pas – so how would a gig featuring some of its brightest stars go down today? We sent four very different reviewers to Here and Now at Wembley to give their verdict.

When your tour is headlined by an internet meme, what does that say about the quality of your tour? If it were going to be a meme, personally I would have preferred Tay Zonday doing a 30-minute version of "Chocolate Rain", with Wembley chanting "I move away from the mic to breathe!" in unison. Instead, we have Rick "Rickrolling" Astley. But then, these are not the gigs I normally go to. The men here all look like haggard ex-Bros members. The women just look lairy: an infinity of hen-nights. I have never felt so alone in all my life.

Of the two acts I've never even heard of, Brother Beyond are merely offensively bad, whereas Kid Creole's faux-calypso could be beamed into space as a deterrent to conquesting alien civilisations. That said, he's also quite a charming old fox. I couldn't quite figure out which of the bikini-clad Coconuts he was sleeping with, but he has a pleasantly old-school air of showmanship about him. While Altered Images rated in the plus column, musically the highlight was Kim Wilde. Her jetstreamed new wave hasn't been ignored by modern indie – even The Young Knives had a go at "Kids In America", a song she milks to a scudding climax. Of course, when she stuffs up the running order, she dubs it a "senior moment", and blithers about how she's "not 25 anymore, none of us are". Equally, Howard Jones's dispiriting proclamation of a new album in the pipelines made me want to hang myself with my lumo ankle-warmers. He's more what you might have expected from this sort of retrofest – naff and blinkeredly basking in a career on which the curtain has long since fallen. "Ah, The Eighties – the golden age of pop!" he simpers, thus confirming his status as the Alan Partridge of the synth. God spare us from "serious artists", God deliver us to Rick Astley – tea boy turned popstar turned trucker turned popstar, tx interweb!!! 3> (thanks Internet!). Thankfully, Rick seems just as bemused by his resurrection as everyone else. He throws a pair of his pants at the audience and opens the show with "Tonight Matthew, I'm going to be Rick Astley" – not only funny, but also a pithy metaphor of the tour. He will get laid tonight. Best of luck to him and his awful music.

Outside, the white stretch limos pull up, ready to whisk the gaggles of tutus and bobbly alice bands back to Ilford, Romford, Deptford, the real world in which it isn't hip to be square, and your dreams aren't china in your hands. It's all over. I hated it. It was completely brilliant. I look forward to watching the disembodied head of Lady GaGa, and a jowly, chain-smoking Lily Allen joshing about her litany of ex-husbands in-between parping out her comedy ska on Here And Now 2029.

I was kinda surprised. I though it was great. I haven't been to a show with that age group, I usually go to something more rowdy with a younger crowd, like a hip-hop throwdown. This is the first pop show I went to and it gave me a good appreciation.

Kid Creole and the Coconuts were the highlight. The Coconuts guy was funny, he was dressed like Jim Carrey in The Mask, in a purple suit with the trousers right up to his waist. I wouldn't perform like that in my shows – dance right out there, but I can't wrong someone for being entertaining. It was great entertainment. They had this song for an illegitimate child, "Annie, I'm Not Your Daddy". Lyrics-wise it was excellent, I always listen out for that. It was real, heavy subject matter, but was delivered in a really catchy way so it wasn't sad at all. That's testament to a good pop song. It makes me want to do a pop song myself, so the things I speak about make everybody sing along. I want people to feel part of it.

Kim Wilde was brilliant. When she came on she had a real vibe. The Here and Now backing band were tight! They were brilliant musicians. I wouldn't say I'd go to many other pop concerts and it wasn't something I'd have done before. I was looking around at the crowd and they were all singing the songs. I was thinking 'I hope I have that when I am older'. There were some young girls, too, and I wondered if they were groupies. They screamed when Rick Astley came on. He had a powerful presence of someone who has been doing his job well for a while.

The songs were better than a lot of the pop songs I hear now. It reinforced my belief that pop music is not what it used to be. There are good acts now, like Kings of Leon. They did "Sex is On Fire", the last pop song I can still sing the chorus to now and remember how it feels to hear it. I think Lily Allen could be a great pop star, but I just don't think she's balanced by what she believes is her truth and how she delivers it. She doesn't know who she is yet. But with someone like the Sugababes there isn't anything to say, and the same with Girls Aloud.

I can't say the Here and Now show has changed my world, but I honestly enjoyed it. Just because you listen to hip-hop doesn't mean you can't enjoy other music. The concert had really good energy and I still have the big choruses going round in my head. My eyes have been opened.

My 15-year-old daughter and I went to the Here and Now concert in Wembley. Getting ready was as much a part of the excitement as taking a trip down memory lane for me. At best I was expecting it to be like a huge disco at the arena – I mean, what could I expect from a list of faded Eighties pop stars 25 years on? Surely age and a few life experiences would mean their ability to belt out those pop classics might be an over-expectation.

Ironically, my daughter is the age now that I would have been when miming "Another step nearer your heart" and "Things can only get better". They were part of what livened up our boring science lessons!

The atmosphere in the Arena was buzzing. 25 years ago, the crowds would have been my daughter's age; instead, they were lager-drinking, aged mums and dads! Was this really nostalgia or just denial? Not sure. My daughter didn't really know what to expect but I had advised her just to "go with the flow", knowing that these artists are completely unknown to her.

For me, the headliners were Howard Jones, Rick Astley and Kim Wilde. Kim had a surprise addition – her singing niece. They sounded amazing together and I had to keep reminding myself that this was now more than 25 years on and this was not Top of the Pops. Surprisingly, she sounded remarkably good and her raspy tones were still very much a trademark. Still funny and quirky, time had not been unkind to her looks, either – pretty good for someone I last saw featured on gardening programmes. Singing a duet with her niece, "Another Step (Closer to You)", she sounded the part and she really rocked, too.

I kept telling my daughter that she's sure to know at least one song, but to be honest I doubted that a bit. I've moved on a bit from my school days of memorising the words to every Top of the Pops song and finding time to script the lyrics to these tunes while doing my homework. Nowadays it's old soul and R&B that play around my household. So why would I expect my daughter to relate to these tunes? There we were, dancing away to Kim's last song, and I looked around at her mouthing away to "Kids in America" – every word! Well, that just goes to show. Whether it has been covered again or related to something current through a jingle or slogan, it proves that the old hits never really die, and the wonderful thing about music is that it can be enjoyed by young and old together; it has that lovely way of bringing memories to life, while for others it's about creating new ones. Hopefully Soraya will look back and remember this for some time to come.

I am currently a GCSE music student, which allows me to be very versatile with all kinds of music that I enjoy. Mum mentioned going to this Eighties revival concert and I was up for it. Even before the concert I was raring to go, and taken in by the whole Eighties theme. When it comes to concerts, I'm completely inexperienced and naive; therefore, my excitement and apprehension was sky high. We are going to see Beyoncé as a pre-16th treat – so I would see how this compares as a first concert.

The general atmosphere of the place was thick with excitement and reminiscences. Although I was unfamiliar with many songs, some performers' name and songs did ring a bell and sounded familiar. The stage presence of the performers was amazing and this triggered lots of audience participation. That, alone, encouraged me to take part and join in with the fun. I was already dressed the part – still can't believe my Mum could have been wearing this gear when she was my age, but hey. Personally, I think we looked pretty cool.

Even though I didn't know many songs, it didn't stop me from joining in. I could understand why the songs represented Eighties pop. Most of the tunes were upbeat, extremely catchy and had this overpowering feel-good factor about them, (a bit of a contrast to rap and some other genres, which can be pretty depressing), which gave everyone the confidence to sing like no one's watching! I know I did! It was also very hard to believe that many of the performers hadn't sung on stage like that in more than 20 years; Kim Wilde, for example, whose routine I was especially blown away by. I absolutely loved her performance of "Kids in America" and could not refrain from shouting the lyrics out, too, much to the surprise of my Mum! I've got to say it though, the Here and Now band were excellent and pulled it off the whole night. I haven't seen a band play live before so this was pretty exhilarating.

Throughout the concert, I had this great warm feeling inside of me. Rick Astley was pretty good too – he was suited and looked quite a gentleman and must have been quite a lovable artist back in the day. Yeah, "Never Gonna Give You Up" quite a catchy tune, one for the iPod I think!

I enjoyed the concert. It would have been better if I knew the songs and was able to sing along, but it was a great experience and a good concert to call my first. 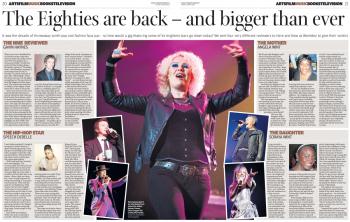