The £15 million MRF at Ford airfield industrial estate is believed to be one of the UK's most advanced facilities and is the first to take mixed recyclables from all West Sussex households.

Operated by waste management firm Viridor, it was developed as part of the county council's 25-year household waste recycling contract with the waste firm, signed in 2004.

The "Reclaim West Sussex" Private Finance Initiative contract underpins the county's efforts to see 45% of household waste recycled by 2015. The current rate is 40%.

The MRF will serve a population of 750,000 and is part of the county's development programme to provide modern recycling infrastructure.

Delayed planning permission and construction issues meant the facility missed the original completion target of December 2008, but was officially opened yesterday by celebrity gardener and pop singer Kim Wilde on behalf of the council and Viridor.

Viridor's south east regional director, Graham Warren, said: "It has been designed to allow the local authority partners to standardise and increase the range of materials collected across West Sussex."

The conveyor and optical sorting technology in the facility is designed to minimise manual sorting and increase quality.

County-wide education, including an onsite Education Centre, is hoped to improve the quality of input material. There is a standardised collection system across the county which is familiar to all 321,000 households.

Fiona Bussell, Viridor's communication manager, believes this will reduce the level of contaminants. "If they all have the same system it helps us increase the level of support from the public," she said.

Ben Eule, Viridor's technical manager overseeing the project, explained that the main aim of the plant was to have the lowest wastage level possible. He said: "We will be looking to recycle at least 95% of the recycling input."

Throughput of the plant will peak at 17.8 tonnes per hour. Sorted materials will be baled and transported from Ford to different pre-processors.

Phil Russell, head of waste management at West Sussex county council said; "Ford will play a key role in helping West Sussex reach a 45% recycling target by 2015 and is an example of the type of infrastructure that is essential in ensuring that residents, communities and councils meet and exceed the challenging recycling targets."

He continued: "The facility is the result of a decade of planning, procurement and is an excellent example of close working between waste collection authorities, the county council and the private sector." 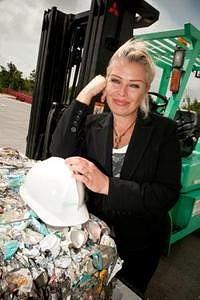