Miles Cain talks to Kim Wilde about touring as an Eighties act and life with her musical family.

Every so oftern another Eighties revival takes place and those of us who remember the decade with fondness will say: "Ah, remember the Eighties? What a great decade." Not everyone agrees. For some, the Eighties were "the decade that taste forgot", and a time blighted by Mrs Thatcher, the miner's strike and high unemployment. But the years between 1980 and 1989 did produce some fine pop music. And the singer Kim Wilde knows all about that.
She says: "I find it hard to be biased about the Eighties. If you ev rget into a taxi these days, the cab driver says it was the best decade, and I can never really agree with them. There was some fantastic music in that decade, but I don't single it out as the decade that was better than others. I'm a big fan of most music and a lot of different decades. I don't subscribe to that notion of 'oh, wasn't the Eighties great', but I can see what was great about it and I'm happy to embrace that. There were some fantastic moments.'
Wilde was a teenager in the Seventies. She went to see bands like The Clash and The Police, and, after seeing Debbie Harry and Abba, promptly decided she wanted to be a pop star. Having made the decision, the next move was to go out and dye her hair blonde.
"For me, the Seventies had a big impact", she says. "I'm a DJ now at Magic FM and I get to choose songs from my past, and the ones I choose are always from the Seventies. That teenage period, up to the age of 20, is a defining decade for anyone. These songs are incredibly evocative at a pivotal moment. It's a huge time of your life. Those bands were fantastic. I was amazed a thow much noise they could make."

A big fan of Elvis Costello and The Police, she loved the punk and new wave scene that dominated the period.
Wilde will be re-visiting her glory years when she is one of the acts appearing on the Here and Now Tour which plays the MetroRadio Arena, Newcastle, on May 21. The tour features a range of Eighties-related acts, including Rick Astley and Howard Jones - although Boy George is no longer on the bill after his being detained at her majesty's pleasure.

"I've done quite a few of them in the past", Wilde says, "and I'm looking forward to being involved again. There are quite a few artists I have worked with before, including Hazel O'Connor, Altered Images and Kid Creole and the Coconuts. It's a great celebration of Eighties music." she says. Wilde was young when she found herself the centre of attention with her hit Kids In America, which was followed by songs such as Water on Glass and Four Letter Word.
How did she deal with the sudden fame?
"Mostly it was fantastic", she says. "All I ever wanted to be was a pop star. After I had clapped my eyes on Debbie Harry and Agnetha from Abba, I found my role models and promptly went out and dyed my hair blonde and tried to figure out the rest after that. I went to art college because I loved art and wanted to join a band. That didn't happen, but what did happen was I ended up working with my dad (well known Fifties rocker Marty Wilde) and it was a hugely creative time, especially for him and my brother."
Kim's dad and brother wrote the material on her first album, which was released in 1981 by EMI> A fizzy collection of tracks mixed strong hooks, rock riffs and early Eighties keyboards, it was ver ymuch a product of its time, but contains songs that still stand up really well now. Her dad was, she says, "A huge influence. He had an amazing record collection. When we were young, we were exposed to a lot of great songs and music. Everything from Tchaikovsky to Elvis, and from Kraftwerk to Joni Mitchell. It wasn't all just one genre, and we listened to the best of whatever was coming out at the start of the Seventies. It wasn't just dad reminiscing about the good old days of rock'n'roll, although, of course, we had a heavy old dose of that as well. He's ahead of me when it comes to music, even now. A few weeks ago he was raving about Pendulum. He just loves music." 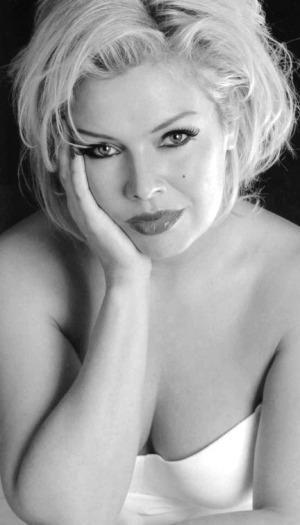