She can still do it: Kim Wilde Interview with Musiktipps24.com

She is the pop icon of the 80s: Kim Wilde. Meanwhile, 30 years of a career in music are behind her, but the blonde beauty with the pouty lips is not thinking of putting the mike down. On the contrary: In August, Kim's new album "Snapshots" will be released and the British singer is currently touring the country. M24-editor Cat has met Kim before her appearance at "Ulmer Zelt", on a sweltering summer day. It was a casual conversation about Kim's roots, her family and her second career as a gardening expert with her own television show. And while Cat was working up a sweat, she peeled Kim as an egg - although both had probably preferred to unpack the folded pool which stood in the backstage area under a tree, all wrapped up, and to fill it with cold water to dive in before the show.

Kim, your first single 30 years ago was "Kids in America". Do you still play the song during concerts?
Of course we do! I think the audience would not let us off the stage, without me singing "Kids in America". It is still fun, and people love this song even after all these years. This shows what a fantastic record it was.

Even my children know "Kids in America" ...
Sometimes we have children in the audience, ten or eleven years old. It's really interesting to see the different facial expressions. There are familiar face with whom we grew up, fans we have known for years, and all who come to gigs, particularly here in Germany. Yes, it's exciting... exciting to be Kim Wilde! (Laughs)

You have a lot of fans here in Germany - even more than in Britain. Why?
This is interesting: I went off stage for a while when I got married and had children. When I first started to appear again, that was before a British audience. And they have really taken me back immediately. The British public has also given me the strength to get back on the stage. But you're also right: The German public has always been very loyal since I was 20, and they brought my latest album in the Top Ten in Germany, continue to give me a lot of attention. This is great, so I spend a lot of time here in Germany.

Let's talk about the past ... When was the beginning of your career, you were very young. You recorded your first album at 20. Does that not come with a risk for such a young woman?
Well, I was lucky that my dad was pretty famous himself. For him fame was like a tool in a box. He took it out when he needed it, has taken care and handled it with respect and then stowed it back in the crate. And that's what I did. I really had very much luck, to grow up with someone who has taught me to deal with fame.

Your father was himself a rock 'n' Roller...
He has even played a lot of gigs, was always a live artist and still is! Now, at 72, he still plays hundreds of gigs a year. He had an amazing record collection, everything from Elvis and Frank Sinatra to Kraftwerk, Mike Oldfield and everything from the Beatles, Joni Mitchell and Carol King and all the great singer-/songwriters ... I always had access to great music, when I was growing up, and exactly this music has inspired my new album, which comes out in August. It are cover versions of songs that I grew up, from the 60s, 70s, 80s and 90s. It's called "Snapshots" and it's released on 26 August.

Which artists do you cover on the album?
At the moment this is still a little surprise... (laughs) I do not like so much talk about it, but I'm already really excited! With the live gigs we're playing quite a few things ...

You have not always made music. After your marriage you began a second career as a garden expert. Sounds kind of funny for a pop star!
I still can not believe I did it! Actually, I never had the intention to start a new career, but just wanted to take a break because of the children. At first I just wanted them to create a garden, and suddenly I started to study a bit of garden design. And one thing I can tell you: This year my garden looks as good as ever! (Proudly) I spend too much time there, between the promoting and the performances. It's the first thing I do when I get home: Go into the garden and see how it looks there. The career has just happened to arise out of my enthusiasm for the cause. Of course you have is a foot in the door when you're famous, but that it was a career, in my enthusiasm and passion for the whole. I've written two books about it, and won several medals and did really well at college. And it was a kind of substitute for the music.

Was it easier to work as a horticultural expert, especially with regard to the children, because you could spend more time at home?
Exactly. I wanted to do something where I could mostly work from home, and gardening has enabled me to that. However, over time I had a lot of site visits, when I had the show. And then became a bit difficult with two small children. I have found it quite hard.

How old are your children now?
Rose is now eleven, Harry is 13. Rose is a great pianist. Today she is playin solo in an important piece in the school - it irritates me that I miss that! And my boy playing electric guitar. He's worked on my last album, "Come out and play". I think he will even be a rock god!

Perhaps he will be touring with you one day?
(Laughs) I think he would rather go with Slipknot and Metallica on tour!

With Michael Jackson and David Bowie you've played in large halls. What do you like better personally: the big gigs, or rather the more intimate venues such as the Ulm tent?
It is fantastic if you can look people in the eye. But three years ago we played with Billy Idol on the Danube Festival in Vienna. There were about a million people there, a human sea - unbelievable! I just loved it.

You worked together with Nena. Where did you meet?
Nena I knew from the 80s and met her at a media event in Berlin. She came over to me and said, "Hi! I am just on a new album and want you to sing it". I replied, "You're kidding. What exactly are you doing?" And she said: "I sing my old songs". I said, "Why? What a strange idea - to re-record your old songs..." I did not know if that was a good idea, but I said, "Yeah, I'll do that," It was a remarkable adaptation of her old songs, and I really thought "Anyplace, anywhere, anytime" was a new piece. We have sealed with a handshake and had a lot of fun!

Do you actually have stage fright when you step onto the stage?
No, I still was never someone who has stage fright. I can not wait to perform! But the adrenaline levels rise naturally. However, today I'm remarkably calm. Where only the adrenaline is gone? Perhaps it is still struggling against the heat... (laughs)

Half an hour later it happens: Kim rocks the stage. No sign of stage fright, and the adrenaline has obviously returned. After a few songs the black jacket flies off - and the crowd loudly singing with old and new songs. She can still do it... 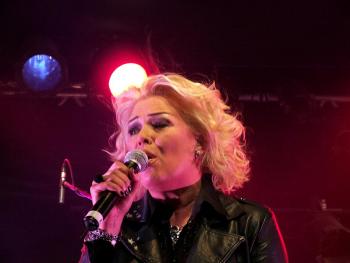