Go Wilde in the garden

Gardens come about for many reasons, but for Kim Wilde, 1980s pop idol, singer and songewriter, it was the simple desire to raise her family in a nurturing environment.

'I wanted my children to have butterflies, bees, birds and flowers, as I'd had in my own childhood', she explains. 'Of course, music was very much the focus in my family, but we lived in the countryside, and were surrounded by people who lived and breathed selfsufficiently and the 'good life'.

Gardening entered Kim's life at a major turning point. She had not long turned her back on a very successful pop career, marrying actor Hal Fowler in 1996, and settling with him in a 400-year-old barn conversion. 'Marriage gave me the psycholgical freedom to step away from a career I'd been in for 16 years', she recalls. 'The time had come to put my showbiz career on hold so that I could focus on raising a family and gardening.'

Soon the first of their two children, Harry and Rose, was on the way, and she determined to transform their bare, scrubby plot into a garden, creating an environment that would inspire and delight her children's senses. 'And high on the anxiety stakes was growing vegetables from seed for the children to see, and eat fresh from the garden', she adds.

Kim had little experience in either gardening or design, so she enrolled on a summer course at the horticultural college Capel Manor. 'I absolutely loved it', she entuses. 'It was as if a massive swtch had been turned on in my head. It totally changed my life.'

At the same time, she sought inspiration from two gardening legends, collecting their gardening books. 'I loved Geoff Hamilton because he made gardening enticing and accessible, while Rosemary 'Latin Names' Verey was very highbrow, but instead of alienating me, her approach excited and challenged me.'

Had she been told at that time that her own book, Gardening with Children, would one day appear on countless bookshelves, she would not have believed it. Yet, to those who know her well, it would have been no surprise. Hugely talented, Kim is the daughter of the 1950s British pop singer Marty Wilde, and was just 20 when she released her first single 'Kids in America' which climbed to number two on the British charts.

Over the next 15 years, it was followed by a string of gold and platinum records, being voted Best Female Singer at the BPI's Brit music awards, and tours with the likes of Michael Jackson and David Bowie. 'But I became almost locked into my old career, someone with few O-levels who would be useless in the real world. After all, what does an unemployed popstar do?'

She had always worked as a team alongside her father, mother and brother, this strong bond underlying everything she did. 'We all depended upon each other, and I arrived at a point when I was no longer sure who I was', she says. It was at this stage that marriage, a family and gardening came into her life, changing it forever. By chance, it coincided with a boom in gardening which shifted the public perception of the garden as unadulterated hard work into that of an inviting outdoor room for dining, entertaining, relaxing and enjoying plants. 'gardening was the new rock and roll - it was a very exciting time', she recalls.

On the back of the gardening boom came new television programmes, notably Channel 4's TV programme 'Better Gardens'. 'I'd barely completed two weeks of my horticultural course, and the producer come knocking on my door - my knowledge was negligible, but I was so passionate about gardening, and that's what came across.'

Moving back into the limelight was not an easy decision, and Kim thought long and hard about the direction she should take. 'I was a wife an mother of two small children, and had thought that being at home would satisfy me, but I hadn't recognised th drive within me. I'm a sucker for a challenge, and was ready to jump into the deep end, and see whther I could swim.'

Swin she did, and so proficiently that she went on to appear in the first two series of the BBC's 'Garden Invaders'. Then, frustrated by her lack of plant knowledge, she enrolled at Capel Manor for the two-year certificate in planting and planting design. The course completed, Kim started writing gardening columns for 'The Guardian' newspaper and 'Prima magazine'. At the same time, she was designing gardens for a wide range of clients, culminating in a gold medal-winning show garden that she nd the gifted plantsman Richard Lucas created for 2005's Chelsea Flower Show. 'It was one of the happiest experiences of my life', she recalls. 'We were surrounded by such fantastically generous people, all helping one another. I'd been to Chelsea as a celebrity in a nice dress, then again with dirty nails and cut hands, and I know which I prefer.'

As her gardening career developed, so did her own garden, with a Rosemary Verey inspired avenue of box balls, reoses, hardy geraniums and hawthorns - latterly replaced with amelanchiers. 'There were problems with fire blight and rust with the gawthorns'. To one side is a gravel area encircled in cutting borders of perennials and roses - one border planted to flower in early summer, the opposite one to peak in late summer. On the other side of the avenue is a vegetable garden of raised beds, with a rabbit-proof bed built by Hal.

'He's becoming more involved in the garden nowadays', says Kim. So too is Jessica, a boisterous Airedale terrier immortalised in one of Kim's songs, and loyal gardening companion. 'If I'm bending down, she'll nuzzle my face, barely leaving my side.'

When Jessica does go off, it is probably to romp through the neighbouring wildflower meadow, where stone sculptures are partly hidden behind a sea of ox-eye daisies and randomly-placed clumps of golden fox-and-cubs.

Living the rural idyll has brought Kim great contentment, so when a chance request to perform as part of a village fundraiser came her way, she was very hesitant. 'I couldn't believe there was an audience out there that'd be pleased to see me', she says. There most certainly was and she has been performing regylarly ever since, with an especially strong fan base in Germany. "Whereas I slip under the radar in the UK, I'm slightly above it in Germany, and that's the way I like it.'

With 11 albums and some 30 singles to her credit, she has recently released a new album of cover versions called 'Snapshots', a very personal interpretation of classics from a whole generation of pop muis. 'It was my 50th year, and I wanted to celebrate my decades in the pop business - it was my birthday  present to myself.'

As to her career as a professional gardener, that has now taken a back seat, but its influence is firmly rooted in her psyche. 'I feel so much more fulfilled now, whereas I could feel very vulnerable and insecure during my early pop career because it was all I had', she explains.

Nowadays, hands-on gardening still figures large in her life, an essential way to unwind, nurture plants, play, relax and entertain, 'It's like a therapy, and if I'm feeling a little overwhelmed by life - which we all do from time to time - the garden is such a healing place, somewhere to enjoy fresh air and exercise, and to rebalance things. I could not imagine life without it.' 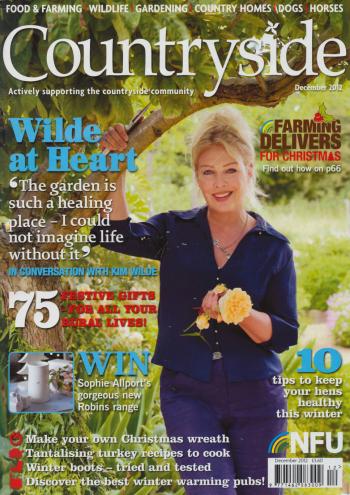 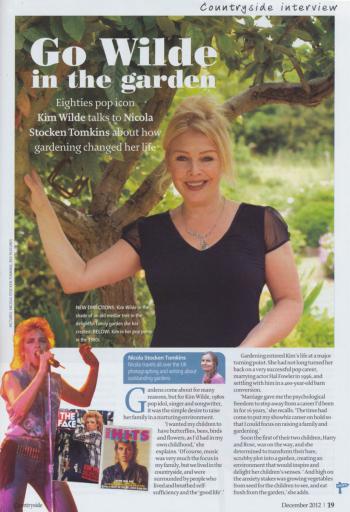 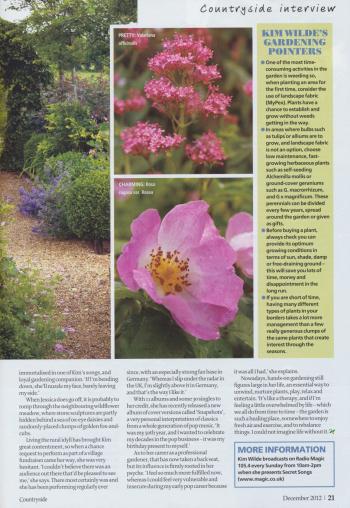 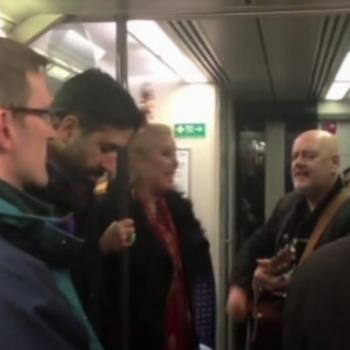 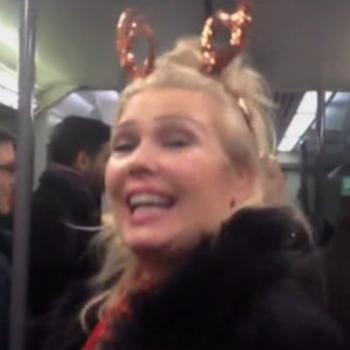