With over thirty million records sold she is one of the most successful female artists from the Eighties. At 57 Kim Wilde is not sitting behind the geraniums yet. She is touring the world with a great band and with 'Here Come The Aliens' the fourteenth studio album of the British woman is in the shops. Time for ten questions to the blonde Eighties sex symbol.

Seven years ago your previous studio album was released. Why did we have to wait so long for 'Here Come The Aliens'?
I am not a planner, that's the easiest answer. Things just come unto my path. After I recorded a Christmas album in 2013, I was inspired to write again. I wanted to explore with my band if we could make songs that would add to my collection of hits. I love my past, but the songs from the past need little brothers and sisters that can stand up live among them. Billy Idol was an inspiration. That man gives a true masterclass rock 'n roll on stage.

The album was recorded at RAK Studios in London, where your success started. Was it a trip down memory lane?
You could say that. That place is like a museum: nothing has changed all those years. I had to think about Mickie Most (founder of RAK, ed.) a lot. He meant so much to me during that period. Alas he's not among us anymore, but I felt his spiritual presence during the recordings, taking us by the hand.

Talking about higher powers: why is the album called 'Here Come The Aliens'?
I experience two phenomenal things during my life. Witnessing the moon landing in 1969 and alien lights in 2009. I was in my garden and saw something that looked like a moon, but it wasn't. Alien life exists and they mean well. We don't have to be afraid. They have been watching us for millions of years and they still haven't destroyed us. Even as we haven't behaved very well during the past centuries.

A song on the album is called 'Rock the Paradiso'. Why the ode to the pop temple in Amsterdam?
Because it's my favourite stage in the world. The atmosphere there is special and they know - just like in all of the Netherlands - how to rock. I love coming there.

Your voice is still as powerful and youthful as it was in the Eighties. Are you careful with it?
Well, I simply sing a lot. So my vocal chords are the best trained muscles in my body. I am blessed with a voice that can stand a lot; even getting older. It's in the genes I think. My father Marty is almost eighty and he's still touring with a fine voice.

What was it like to grow up with a successful artist like your dad?
There were two sides: it was horrible, because believe me: no teenager wants to have a famous father or mother. I can tell that from my kids. But on the other hand: he meant a lot for my career. He always brought home the most fantastic music, which inspired me and when I became a musician myself he co-wrote a lot of songs.

Your brother Ricky produces the new album. He has been involved in your career from the very beginning. What is your relationship like?
I always say: we speak two languages: English and music. We are almost equally old and grew up during the Sixties, which was the birth of pop. A magical time, which influenced us and fuelled our love for music. That's why we recorded the song 'Pop Don't Stop' on this album.

At the end of the Nineties your pop seemed to stop, when you started working for TV and said goodbye to the music world. In 2003 you reconsidered. Why?
Simply because I felt like it again. I was asked to do an Eighties tour with Human League, ABC and Heaven 17 and I enjoyed it so much that I started writing again. It was great to experience that there were still music lovers waiting for me. I didn't expect that. I still saw myself as the sex symbol from the Eighties, but luckily an older Kim Wilde was also embraced by the fans.

It's no coincidence that many stars from the Eighties are still active and successful. How do you explain that?
It was an explosion of talent and technological possibilities, I think. It was the time of new wave and post punk, pop made a comeback and the synthesizer was introduced. Ricky and me embraced all the developments and got on with it. For us everything simply fell into place. Sometimes you need a bit of luck. If you keep developing, like many bands from that time did and still do, a long career in this difficult and volatile trade is possible.

Something that didn't hurt your later career was a fragment on YouTUbe, in which you sing 'Kids in America' while drunk in the underground. What did you think when you saw that video the first time?
I had to laugh, mostly. You know, I was especially grateful that everyone responded to positively. But it didn't hurt my career. If I ever get to manage an artist, my advice would be to go to a Christmas party, put on reindeer antlers, drink a lot and get yourself filmed on the way back. Best action ever, haha. 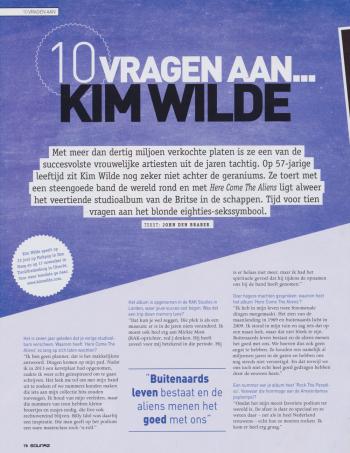 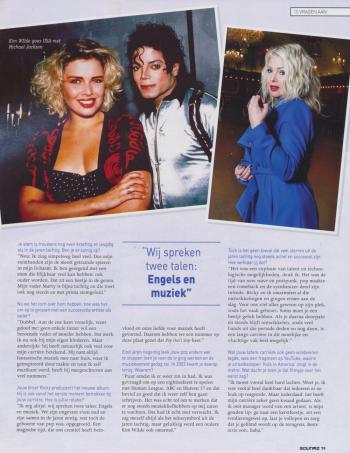