More than two decades since her last album, Kim Wilde is back - and Amy Noton discovers she hasn't lost any zest for life.

Boasting 25 singles in the UK charts between 1981 and 1996, Kim Wilde has had more success than most artists in the music business - her catchy debut song 'Kids in America' will be ringing in our ears for decades to come. Now, 37 years after her first hit single catapulted her to stardom, Kim has just released her 14th studio album, Here Come The Aliens, and she is about to head out on a 19-date UK tour.

"It's the first album I've released in the UK since I got married in 1996", says Kim, who is the oldest of four children of veteran singer Marty Wilde and his wife Joyce. Marty recently celebrated 60 years in the music industry and played shows at Ipswich Regent Theatre and Pontins Pakefield last year.

Kim, who will be kicking off her UK tour at Ipswich on March 30, says: “I’ve had a kind of dual career, writing, recording and releasing music in Germany, Austria and Holland. It’s been quite nice to just get on with life over here, but now I feel brave enough to put my head above the parapet again.

“I don’t think I’ve toured the UK for more than 30 years, so I can’t wait to play this brand new show with my fantastic band. We’re going to be playing my biggest hits and some fabulous tracks from the new album ... we can’t wait!”

The album, which was released on March 16, was recorded at the legendary RAK studios in London, and features 12 tracks, including a duet with Swedish star Frida Sundemo. The songs – including the fabulous ‘Kandy Krush’ – offer a blend of fresh-sounding pop with a 1980s twist.

“The new album has lots of ’80s flavours and sounds,” says Kim, who has sold more than 30 million records worldwide. “I’m still working with my brother, Ricky, who’s a producer of the album and the co-writer for most of it, so there’s a musical thread that’s been there from the very beginning. We still love pop music, we love playing live and the tour just brings all of that together - the past and the present.

“When I started out, my main ambition was to be on ‘Top of the Pops’. I just loved pop music so profoundly and I was desperate to be part of that world from a very young age.”

The success of her first single was followed with hits including ‘Chequered Love’, ‘Cambodia’, ‘You Keep Me Hangin’ On’ (number one in the USA), ‘You Came’ and ‘Four Letter Word’. Kim won a Brit Award for Best British Female in 1983, toured with Michael Jackson in 1988, saw her album ‘Close’ go platinum, and appeared as special guest of David Bowie during his 1990 tour.

She delighted Norfolk audiences with her performance as part of the retro festival at Earlham Park in Norwich last June, with fellow 1980s stars Tony Hadley of Spandau Ballet, Bananarama, Howard Jones and Midge Ure, and has also played Blickling Hall.

But Kim’s life took a different path in the late 1990s when she reinvented herself as an awardwinning horticulturalist - partly so she could spend quality time with her actor husband, Hal Fowler, who she had met when they were in the musical Tommy, and their children, Harry and Rose.

“I wanted to become Mrs Fowler instead of Kim Wilde,” she says. “But there was also a spiritual necessity for me to get back to earth, literally. Gardening was a sanctuary. It was beautiful to be connected to the soil and make things grow.”

Appearances in a series of 1980s revival shows kept Kim’s love of performing alive and it was the British public’s positive response that encouraged her to release the album.

“I love performing, songwriting, singing, all the same things I loved doing back in the ’80s, except I love them a little bit more now,” says Kim.

“I think part of that is the confidence that comes with age. We’re at a point in our career where it doesn’t matter if our album goes to number one or number 100, it’s not going to materially change what we do. We’ll carry on writing, we’ll carry on performing.

“I’m just having a great old time. I’ve been married for more than 20 years and I’m really excited about the careers of our children, who are both musicians. This is as good as it gets. I count my blessings every day.”

The kid’s in Ipswich! Kim Wilde is playing the Regent Theatre in Ipswich on Friday, March 30 - the opening night of her UK tour. Tickets range from £ 28 ro £ 35.50, from the Box Office, Regent Theatre, St Helen’s Street, Ipswich, Suffolk IP4 1HE; 01473 433100, or by email from boxoffice@ipswich. gov.uk For details of Kim’s Here Come The Aliens tour, see the website www.kimwilde.com

Her brother, Ricky
“Working with Ricky is wonderful. We’re so close in age it’s a bit like being a twin. There are places in our heads where we’re very different, but when it comes to music we’re on exactly the same page. We grew up together, had all the same musical influences and both absolutely love pop music - it’s been our big passion since we were kids.”

‘Kids in America’
“I absolutely love performing it now, but there was a time when I really didn’t enjoy it and that was when I took a step back, got married, got into horticulture and had babies. I’d had enough of singing ‘Kids in America’ at that point. I was 36 and had been living with the song for 16 years. It was a relief to give it a rest, pursue other interests and put my family first.”

Touring with Michael Jackson
“When they asked me to do the Jackson tour, I couldn’t believe it and I remember saying to my mum: ‘This is ridiculous!’ But she gave me that conversation that mothers have with their daughters and told me that I was the best thing since sliced bread, and I fell for it! I was completely inspired by watching him when he was at the top of his game.”

Advice for her younger self
“Listen to your instincts. People often go wrong when they ignore the voice inside their head. There’s a lot of wisdom in there, if only you’d listen to it. And follow your dreams, follow your passion, don’t put it off too long. Life passes by very quickly – don’t put things off.”

The music industry
“I think the music industry is as vibrant as it’s ever been. The social media aspect, streaming and downloading is all really exciting to me. The fact I can walk across the field and talk to my phone and say ‘Hey Siri, play me some David Bowie’ and all of a sudden a track pops up on my phone, I think it’s fantastic. There’s something really magical about the way you can access music now.” 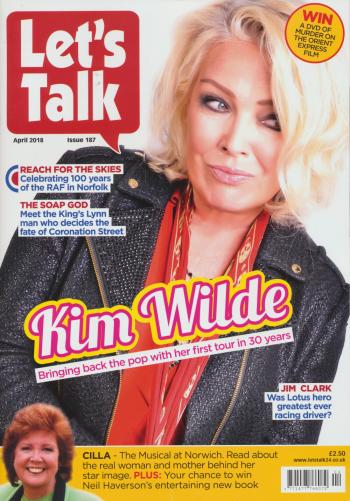 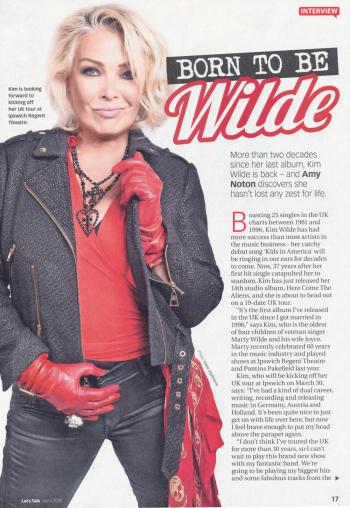 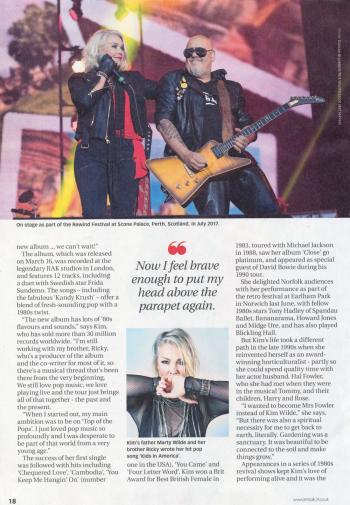 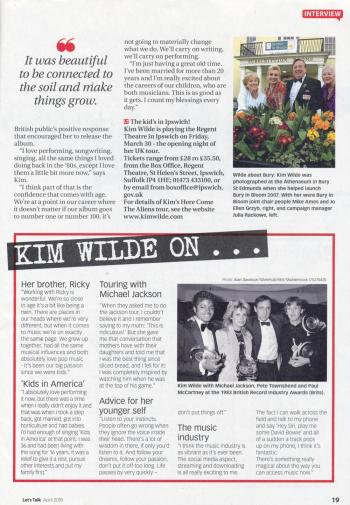