Kim Wilde, 57, found fame with her 1981 debut single Kids In America. She has sold more than 30 million records, with 25 UK top 50 singles, including Cambodia and You Keep Me Hangin' On. She lives in Hertfordshire with her husband Hal Fowler and children Harry, 20, and Rose, 18.

What is your most memorable holiday?
My first visit to Thailand in 1992. I was supposed to be promoting a new album but my career started stalling and it got postponed. I felt relief as I'd been on the work treadmill since 1980. I grabbed a rucksack, flew to Bangkok and took a boat to the island of Ko Pha-ngan. There was no pier in those days – we all fell off the back of the boat and followed a dusty trail to a beach where lots of beautiful people dressed in silks and saris were paddling in turquoise sea. It was so tranquil – for a few hours until a Full Moon Party kicked off and everyone was raving under the stars. I had my first taste of Thai green curry there. I was like, “Really? Green?”. That sweet, spicy smell is still my favourite.

And your worst?
In the late 1980s I did the “Bad” tour with Michael Jackson and we performed a huge gig in Paris, where I was known as the “Bardot of Rock”. I felt fine during the gig but then my record company took me to a fancy restaurant off the Champs-Élysées where I had shellfish – I knew about that for a whole week afterwards. I lost tons of weight though, so there's always a silver lining.

Which souvenir do you cherish most?
A beautiful crystal, which I trod on while walking in the Lake District. I fell in love with the Lakes in 1996 when my husband first took me and we honeymooned there. We went back while I was pregnant with Rose, walking up Barrow Fell, when I stepped on a heart-shaped stone, embedded with real crystals. I felt the Lakes had given me a present to welcome new life. It's utterly precious and sits in my garden, sparkling in the sunshine.

Best holiday read?
I really enjoyed The Celestine Prophecy by James Redfield, which I read while backpacking around Australia in my early 30s. All the book's living in the moment and realising your full potential mirrored the immense freedom I felt away from music and touring. I went hiking in the Daintree Rainforest near Cairns, snorkelled in the Great Barrier Reef and stargazed on Magnetic Island. I felt every moment counted.

How do you spend your time on holiday?
It's just me, the old man and our dogs now, and because our lives are busy we like to do very little on holiday. The Dordogne's a big favourite. We might visit Lalinde village market, smell the croissants, pick up some fig jam, smelly cheese and baguettes and take the dogs for a long walk with a picnic. A glass of wine in a chateau garden ends the day nicely. Then sleep, repeat.

Where would you revisit?
Japan. I promoted an album there in the 80s and remember seeing beautiful, manicured gardens in Kyoto. I've got a second career as a gardener and would love to explore their neat landscapes and planting. I always need a nature fix on holiday.

Where next?
I'm touring in Germany from September, as well as Austria, the Netherlands and Belgium. I'll catch up with the mates I've made over the years there. 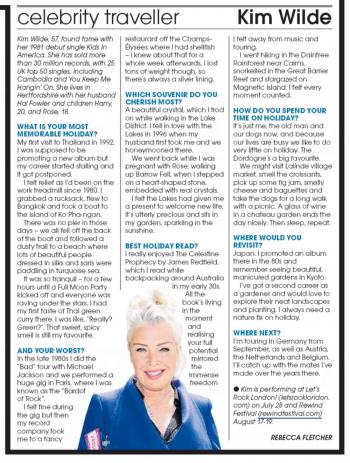