From the forest into space

If she did anything great in her life, Kim Wilde said years ago in a newspaper interview, then... Wait, we suggest, "Kids in America" (1981) No. "You Keep Me Hanging On" (1986) No. Um... what about the duet "Anyplace, anywhere, anytime" with Nena (2003)? Neither, but rather, "I've created a forest," in her own garden in County Hertfordshire, a few miles north of London. There was an empty space, and then, through years of work, a forest emerged from where an owl finally flew towards her.

A forest is a great thing. People have achieved much less, and Kim Wilde, whose real name is Kimberly Smith, the trained landscape gardener, may have crowned her first profession. But with the friends of pop music, a pretty big empty spot in the blonde-singer-shelves would gape if the Briton had limited herself to her green thumb.

Currently, a particularly beautiful piece is added: Kim Wilde's new album "Here Come The Aliens" is already a visual treat, the cover in the style of American monster movies of the 60s designed: "Recorded in Techno Sound", "Starring Kim Wilde" - the vulnerable acting blond woman ducks on the shore in the face of a dreadful threat, the sea beats, the stranger already reaches out to her hands.

Twelve songs have landed on the new work of the now 57-year-old pop princess of yesteryear, the first single "Pop Do not Stop" a real catchy tune - with an intro, by the way, which is almost identical to the overture to "Video Killed The Radio Star" by the Buggles (1978), but only marginally. Kim's brother Ricky Wilde was this time responsible for the production of the album (on their own label Wildeflower) and found a balanced mix of melodies and punchy rock riffs. The voice of his big sister has lost nothing over the years; she still gains more warmth. Of course, the maternal has strengthened, which Kim Wilde somehow, always transported somewhere, even in their early twenties, at least in comparison with other conquerors of the hit parades of that time.

The album title can be found again in "1969", the groovy upbeat song. But why aliens, what does she have with the aliens? Well, nine years ago, a UFO visited Earth, big as a skyscraper, also in Hertfordshire by accident, or just by chance, Kim Wilde mused, "Maybe the captain is a big fan of Kim Wilde and wanted to see where I live" She said to her husband, "I wonder if he is beaming me up and asking me to sing Kids In America for the rest of my life."

As you know, it turned out differently (or our Kim Wilde here on earth is not the real Kim Wilde, but a copy, and the real is on the way in the UFO and sings "Kids In America"). The song "1969", starting from the first moon landing, then tells a very different story: The extraterrestrials do no harm in the radiation shields, but they may want to save us from the apocalypse that we cause ourselves. Thank you, dear aliens. Also for her Kim on tour to Germany in October. 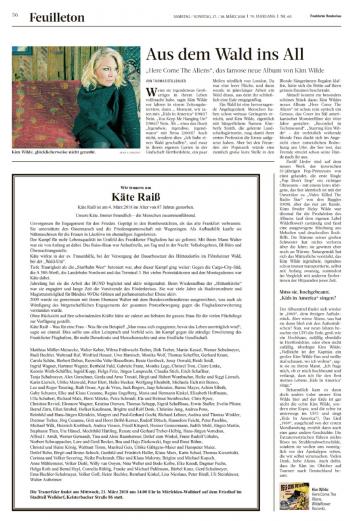