Date
May 23, 2018
Published in
AXS (UK)
Written by
Kevin Wierzbicki

She was the most-charted female singer in the 1980s and pop star Kim Wilde’s hits like “Kids in America” are as much fun to sing along to today as they were back then. Wilde has remained in demand as a live performer and recently her show has changed a little bit. With her recently-released and well-received album Here Come the Aliens, Wilde now has a full set of new songs to add to her live performances.

The first single from Here Come the Aliens is “Kandy Krush,” a cut full of musical hooks, a killer mid-song guitar solo and plenty of the sweet vocals that Wilde is known for. Fans of Kim’s ’80s output will love the song and it will give new fans good reason to go back and investigate her back catalog. But Wilde may also be expanding her fan base in an out-of-this-world way; Here Come the Aliens is informed by an experience the singer had a few years ago when she was one of many in her native England to spot a strange light in the sky.

Wilde answered some questions for us by email and told us just exactly what it was that she saw in the night sky and how she feels about, given the chance, hopping aboard a UFO. Her commentary below is given exclusively to AXS.

Your new album is called Here Come the Aliens and it is in part inspired by an experience that you had that you believe involved extra-terrestrials. Can you tell us what happened?
In 2009 I was in our garden and noticed some helicopters coming towards us from the southeast, accompanied by a very bright light. The helicopters flew away leaving a bright ball of light in the sky that silently remained there behind a cloud. Suddenly it moved across the sky with lightning speed, and then back again to its original position. Thereafter it zigzagged for several minutes and was joined by a smaller light that followed the larger one. I had two witnesses with me, and locally the story made the papers as someone had managed to take a photo of the sphere. My feeling is that the sphere was incredibly big, perhaps the size of a large building, perhaps bigger. I have since discovered that many people all over the world have also witnessed such events. Some of it has been caught on video and I am in no doubt that they are extra-terrestrials. And they have been observing and interacting with us since mankind began.

How did friends and family react when you told them about the incident? Did you take a bit of a ribbing, or were you taken seriously?
I was fortunate that the story made the local paper, but yes, I’ve got used to people giving me a funny look when I speak about it. My overwhelming feeling is that whatever/whoever it was is benevolent.

You’ve never retired from music but it has been a long time since you’ve released any new material. What were the circumstances that made you decide that now was the time to make a new record?
The Here Come the Aliens album was inspired in many ways by our increasing ‘live’ work worldwide with my fantastic band. My brother Ricky Wilde and I wanted to create some new songs to keep our old hits in very good company, a tall order but we felt we were up for the job! We don’t mind having one foot in the past, but in our hearts, we’ve always wanted to keep our music fresh and relevant. Now we can do both!

You’ll be performing at the Rewind Festival: South this summer and a lot of your peers are also on the bill. Will you have time to catch up with any old friends while you’re there?
We love Rewind, catching up with our old ’80s chums, and the amazing U.K. audiences which grow and grow as each year passes! The ’80s are perhaps bigger now than they’ve ever been. The fabulous diversity and the enduring songs of the ’80s have really stood the test of time, and all the artists are as passionate about performing them now as they ever were.

Back to aliens. Let’s assume they do arrive and they’re friendly and big fans of yours, and they ask you to perform on some distant planets. Would you be interested in a “Kim Wilde in Space Tour”?
Of course, as long as they give me a return ticket! 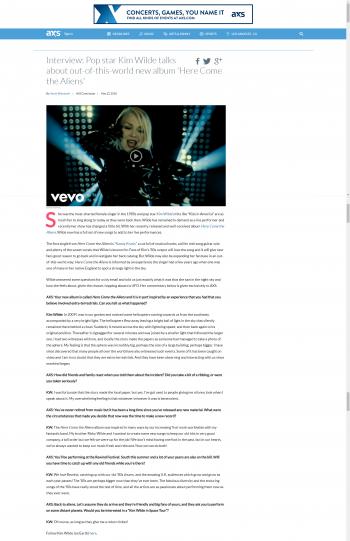