With Kim Wilde, who will be on tour in Treysa

Kim Wilde, the pop star, idol of the 80s. Her hit "Kids in America" ​​made her famous, recently the 57-year-old released her new studio album. On her European tour, the Briton will also sing in Treysa. We talked to her about pop music, rock 'n' roll in old age and extraterrestrials.

Ms. Wilde, you grew up with the songs of David Bowie and Michael Jackson. Do you see any differences between the pop music of that time and what we hear on the radio today?
Of course! The great thing about pop is that it keeps changing. That's what makes it so irresistible. Just like fashion. Pop has to change to stay fresh. Often we interpret the past to reinvent it. It's how we get familiar with sounds, melodies and lyrics. We reinvent the past all the time. And so it stays alive.

Do you miss the past, the Eighties?
No, not really (laughs). I actually prefer getting older. I have more fun as an artist these days, as a lyricist and singer, than I had in the Eighties. It was all about videos and TV back then. Lots of it was so far detached from music. I love to play live.

What is the biggest change between your start with 'Kids in America', your first album 'Kim Wilde' and the music you make now?
The main difference is that today I work with a band that can also be heard on the album. Some of the others also co-wrote the lyrics. We spend many years together. Our music is not only about Kim Wilde, but also about the band. My brother is also a part of it. For me, all this is a collaborative experience today.

Your new album is called "Here Come the Aliens". Are you often asked about aliens, extraterrestrials these days?
Yes, in fact. I have seen something incredible in the sky some time ago, above our back garden - just like many people in our area. It has really inspired me, positively. It was also the inspiration for the album, especially '1969' and 'Rosetta'. I have thought about the meaning of life, about the meaning of the universe. I look up lots of the time in case something else incredible happens in the sky.

What did you see in the sky?
It was an extremely bright light, hard to tell how big it was. It must have been huge, bigger than a house. It hovered in the sky at first, but then started to move, incredibly fast and jumpy. That went on for about ten minutes like this. It was a small light that followed a larger one. And then they disappeared. That was amazing.

So, should they exist, what do you think the aliens think about us?
It's what I talk about in my song '1969'. It describes how they come around to see what a mess we've made of our planet. I think they do not appreciate that at all. But I do think we'll survive and they will do what's best for our planet. I am an optimist and I do believe that they will help us save the planet for future generations.

So we talk about peaceful aliens.
Yes, while there are also evil ones (laughs). I mean, however, that something basically evil would not develop so far. Because it has bad energies and is self-destructive. Only the good continues to develop. So they should be a peaceful bunch. Unfortunately I do not know for sure because they did not talk to me (laughs).

On your tour you will sing in Munich, Cologne and Hamburg. You know all the big stages of Europe. Do you sometimes feel alien when you come to a smaller stage such as in Schwalmstadt?
No, that does not matter to me. I do not care if it's 500 or 50 000 listeners. I've performed in front of all sorts of crowd, I'm used to that. For me, every show is very, very important - no matter how many people are in front of the stage.

Are there differences between smaller and bigger audiences?
There are huge differences. The reactions are different. For example, if there are bands in the city, people are more relaxed about my music.

Is there a different connection between you and the people?
I toured all over Europe for many years. The people who come have decided to see me. We grew up with each other. So there is a connection.

A personal question: I am 28 years old and grew up with your music. I only know you and your songs from the internet. How could one imagine your live show in Schwalmstadt?
It's rock 'n' roll, it's very loud, with a lot of energy. It really turns out quite a bit (many may surprise you because they know how old I am, they think you'll settle down with age and we'll surprise these people.

In other words, there is still rock 'n' roll in Kim Wilde in 2018?
WILD: Absolutely, more than ever. I think you realize in your old age that you have to do it now. You will not be on the stage forever, you have to give everything now. Life is not infinite and not everyone has the chance to do what I do. So we give 100 percent passion - and that connects us with all people, even with young people like you.

The older you get, the more you enjoy the time on stage.
We appreciate all this much more today. The little things, but most of all Rock 'n' Roll (laughs). For me, the stage is a sacred ground, nothing is more important at this moment - every second counts. I know how blessed I am to be able to stand up there.

'Do I really want to do this to myself again?' 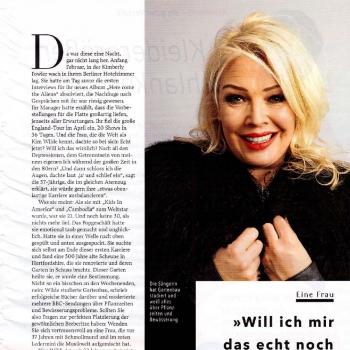