In the Eighties Kim Wilde stormed the charts to more or less disappear from view during the past thirty years. Now she's back, and she thanks her comeback to aliens.

Bursting into the charts in 1981 with her first single Kids in America, Kim Wilde — the daughter of Fifties rock-and-roll star Marty — proved to be much more than a one-hit wonder, going on to deliver some of the Eighties’ biggest sellers (Chequered Love, You Came, and a cover of The Supremes’ You Keep Me Hangin’ On) with sauciness and sexiness to spare. Kim took that Supremes cover to the top of the American charts. She toured with Michael Jackson and David Bowie, but the hits began to dry up and around her 30th birthday she had a breakdown — burned out by a rollercoaster schedule and desperate to settle down and have children. Then she met Hal Fowler when they co-starred in the musical Tommy. They married and started a family, and she reinvented herself as a celebrity gardener. In the Netherlands she had a hit with Nena in 2002, after she asked her to record a new version of 'Irgendwie, Irgendwo, Irgendwann', reaching number one as 'Anyplace, anywhere, anytime' for five weeks. After this, Kim did revival tours every now and again, for instance with Paul Young and The Human League. She also scored a YouTube hit with a somewhat tipsy version of 'Kids in America' in the London Underground. Now she's back with a new album, entitled Here Come The Aliens, with a very special story.

Here Come The Aliens is an interesting album title. What does it refer to?
In 2009 I had an encounter with a UFO in my back garden, you know, like you do. I saw some huge lights moving back and forth in the sky, just above the clouds. Many people saw those lights and the local newspapers even wrote about it. When you see something special and perhaps extraterrestrial, it changes you. I believe they are already on earth, to watch over us and to observe us. I haven't gone crazy, but I can't stop thinking about it.

You did festivals, but are going on a solo tour again for the first time in thirty years. What may the fans expect?
It's looking good and sounds spectacular. I play almost half the album, with some of my biggest hits in between. My band is fantastic. It will be energetic, loud, a combination of hardcore pop and rock with a large dose of humour.

They will be fighting for tickets. Since when did you realise that you have a large gay fanbase?
Right from the start I had a lot of gays among my fans. I received a lot of fanmail from them and I met them after concerts. I enjoyed how they responded to me as a person and to my music. In the Eighties they formed a large group, following me around to all my concerts, and they are still there now. They love my songs, of course, but even more that I never take myself too seriously and I don't mind messing up every now and again. It is my purity, like RuPaul would say. And perhaps because of some of my outfits!

Do you remember your most outrageous look?
A few months ago I saw a repeat of Top of the Pops. I looked like Barbarella in bondage, singing 'The second time'. It is a naughty song about sex. But you won't see me in an outfit like that anymore.

In the Eighties you had a seductive and sexy image. Was that the true Kim?
It was part of me and it still is. I love that part of myself, I can wear it as a costume whenever I feel like it. Just for fun. I am not a style icon like some other artists, especially because I make fun of myself a lot. Am I sexy and seductive at home? (laughs) When I am expected to be, sure.

Tell me about the highlights from the early days of your career.
In the beginning, everything was great. We travelled around the world and I met a lot of pop stars. The Rolling Stones, The Police, Tina Turner... And I suddenly appeared on Top of the Pops, a show I loved since I was a child. It was unbelievable to suddenly become part of the world I admired and respected.

Which celebrity impressed you the most?
Michael Jackson. In 1988 I was the opening act during his Bad tour. I was called in for a photograph, and when I was standing next to him, I realised how tall he was. I remember he was living very secluded from the rest, while my band and I always made fun. I sensed that he was missing a lot in his life.

You also toured with David Bowie. What was that like?
Bowie was a beautiful man, really beautiful. He would stick his head around the door and say 'Good luck with your concert, Kim'. He was nice and down to earth with his London accent. We didn't spend a lot of time together, because he'd just met his big love Iman.

You once told about your small fling with Adam Ant. Are there more celebrities you had a thing with?
Such a cheeky question! I can't think of anyone. I did have an eye on Nick Heyward. We once photographed a date for a magazine. I hoped he would ask me out on a dinner afterwards, but alas...

When you turned thirty, you battled a depression. Do you know what triggered it?
My career grinded to a halt. I'd lived like a pop star for ten years, without finding out whether there was more out there. It felt like I'd lost myself. I started eating more healthily and sleeping better and drank less red wine and champagne. It was a matter of time before my biggest dream was fulfilled: starting a family.

You left the pop world behind to start gardening. Did you miss the glitter and glamour?
No, quite the contrary. I found myself because of the gardening. It was the healing power of nature.

What made you return to music?
When the children were a little older, I was asked for a series of Eighties concerts, together with Human League and Altered Images. It was fun to do, in part because of the alcohol flowing. Drinking too much isn't good when you don't feel good, but I felt lots better in this case.

Talking about alcohol: the movie on YouTube from 2013 is brilliant. What did you think when it appeared online?
Oh God, that was hilarious. We sang on the train after a party where I'd drunk quite a lot. At home we saw the views and likes blow up on YouTube. I thought it was the end of my career, so I was stunned by the response. People worldwide decided that it was funny. I thought I'd shot myself in the foot, that's how I am. But I got away with it.

What is the most rock and roll thing you ever did?
Nothing destructive. Six years ago or so we were in Germany. On a night off we were drinking and suddenly I found myself practically naked in the hallway of the hotel. I thought I'd walked into the toilet and the door closed behind me. I only wore tiny panties - and I don't have a very tiny body. I had to go downstairs at 4am to the lobby to ask for a new key. The receptionist looked like he'd just seen a ghost.

Could we have caught you doing diva behaviour?
When you're on stage, you're in a certain emotional state. It's really something to stand before a huge mass of people and something isn't right. Then it's quite easy to change into a diva, which happened to me a couple of times. Once the stage was soaking wet because of the rain and I was afraid I'd break my neck. I was screaming backstage: 'What is wrong here? Where is the safety? What the fuck!' Everything came out. I behaved dreadfully, but I did have a point. It wasn't because they didn't paint my dressing room white and the orchids were fogotten.

You look like someone with a raunchy sense of humour. What is the filthiest joke you know?
I can't remember jokes, but this one goes more or less like this: what is Twitter? The spot on your body between your twat and your shitter.

What happens when Here Come The Aliens is released? Will the aliens visit you again, you think?
I do worry about that. I am afraid they come and get me because I told my husband back then that they were probably fans of mine who wanted to find out where I lived. They may suck me on board and I'll have to sing 'Kids in America' to them for the rest of my life. 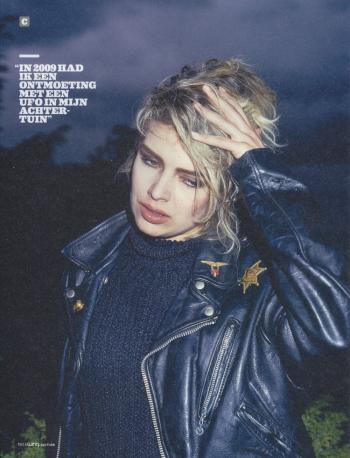 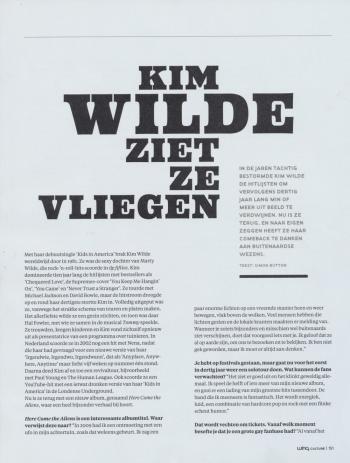 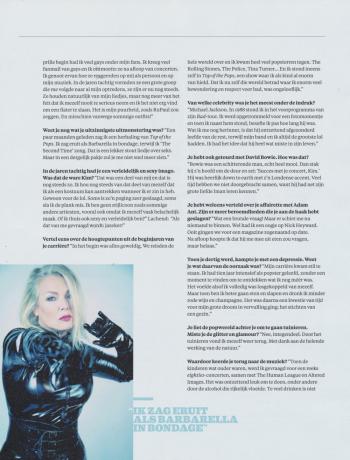 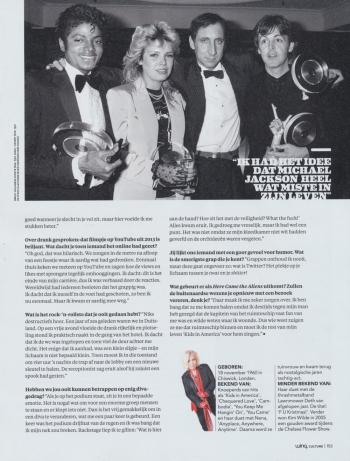