Kimcredible! Queen of Pop saves the best for last...

What a wait it has been for Manchester fans. We were the final show on Kim's UK tour - but it was well worth the wait as the Queen of Pop saved the best for last.

Thanks to social media, I had seen a lot of the show from fans' videos and I knew the set-list virtually by heart. But that didn't take anything away from my enjoyment of the show.

It's hard to believe that it is almost 36 years since I first saw Kim in concert, but the excitement I felt at her latest show was the same as I felt all those years ago at Manchester Apollo in my early teens. And Kim's voice was just as good.

The crowds may be smaller, but the energy levels are just as high - and Kim and her band looked like they were loving every moment.

With brother Ricky on guitar and niece Scarlett on backing vocals, there was a real family feel. This extended to the rest of the band. Kim may be the voice, but there is true camaraderie with the whole band. And having two drummers on stage added an extra edge to the sound.

Support act Lawrence Hill started the night off well. A likeable guy, he played a short set, showing off his great voice, using loops to create an interesting sound.

From the second Kim took to the stage, it was a non-stop party. Opening with 'Stereo Shot' from new album 'Here Come The Aliens', it was one classic after another. Oldies 'Water on Glass' and 'Never Trust a Stranger' were followed by latest single 'Kandy Krush'. My throat was already sore from singing along at the top of my voice.

It was back to the 80s for 'Cambodia' and then the immensely-catchy 'Birthday' and fellow new track 'Yours 'Til The End'.

Scarlett was given a chance to show off her voice as she performed a duet with Kim on 'Another Step (Closer To You)'. Hopefully, now the tour is over, Scarlett may release some of her own music. She's already proved on 'Here Come The Aliens' that she is capalble of writing a good tune and, with dad Ricky and aunt Kim, surely she has the connections to make it on her own - she certainly has the voice and the image.

'Words Fell Down', 'Bladerunner' and a cover of the Bee Gees' 'If I Can't Have You' were followed by 'Four Letter Word'. Ricky took over the co-vocals on new track 'Rosetta' as the album version is a duet with Frida Sundemo. But Ricky did it justice, making me wonder why his vocals don't feature prominently on other songs.

The tempo refused to slow as Kim treated us to four of her biggest hits, 'View From A Bridge', 'Chequered Love', 'You Came' and 'You Keep Me Hangin' On'.

New album opener '1969' closed the set with band members donning alien masks after Kim had told the story of seeing bright lights in the sky a few years ago, which she believes were aliens.

But Kim wasn't finished as returned for the encores, her newest classic 'Pop Don't Stop' (the best song I've heard all year) and 'Kids in America', one of the greatest pop songs ever written. And what a version of 'Kids in America'. It has been covered by thrash metal group Lawnmower Deth, but this version by Kim's band was just as heavy and a stunning end to the show.

It wasn't just the music that was such a delight. Kim was on top form with her between-songs chat. She was visibly moved a couple of times. And the way the band interacted with each other was a joy to behold. You'd think that after well over a month of being on the road, they'd be a bit sick of each other, but they were laughing, smiling and joking around with each other.

The new songs fitted in so perfectly with the hits from the 80s. It's great that, after all these years, Kim is back on the radio... and back in the charts.

If she had released 'Here Come The Aliens' in her heyday, it would be hailed as a classic. I urge anyone who claims to love pop-rock to give it a listen. You won't be disappointed.

This was only the fourth time in almost 36 years that I had seen Kim live, but she promised the audience that she would return soon. And we will hold her to that! 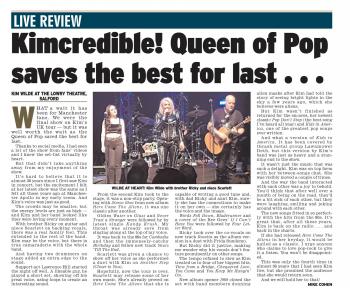 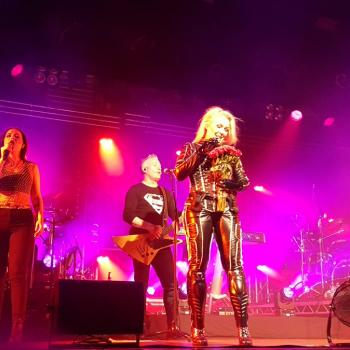 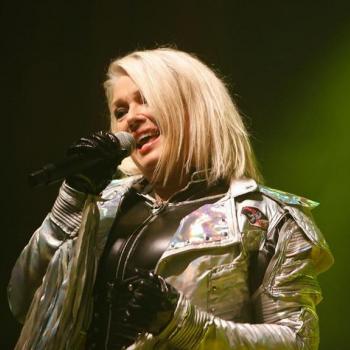