Back in the spring of 1981 I went into my local record shop and bought Kim Wilde – the debut album from the singer. It’s an album that is still on my rotation list today – albeit in the ‘cloud’ as opposed to vinyl, as are subsequent albums like Select, Another Step, Close and Love Is. Kim Wilde’s music was very much the soundtrack to my teenage years and beyond, and her latest album, Here Come The Aliens, harks back to those sounds of the early 80s. I’ve had the pleasure of interviewing Kim numerous times over the years and have caught her on a number of 80s retro multi-act shows, but have yet to enjoy a headlining, full-on gig of hers. That is all set to change when the singer plays Sage Gateshead on Monday, on her first headlining tour of the UK in more than 30 years.

And Kim sounds just as excited about it as I am! “It’s a totally different thing to turning up and doing half an hour and singing my greatest hits and going home, as lovely as that is. I think those gigs have given me confidence to do this tour,” she tells me. “I’ve noticed in the last 10 years how the audiences have just grown and grown and the reaction I get whenever I go on stage is always massive. The album has also given me the confidence to really go for it. I’m really proud of it. Sometimes the timing just suggests to you what’s right. I feel like the wind is blowing in my direction.”

If the concert is as good as the album, fans are in for a treat. I suggest to Kim that Here Come The Aliens has that classic sound that we grew to love from her in the early days. “We wanted it to sound live. We got the band in the studio to create that live sound that we had with the very first album,” she says. “I’ve got a great band and they are going to be coming out with me on the tour. It’s all been in the masterful hands of my brother Ricky, who created my first album and all my significant albums since then, especially Close. It’s really down to him, he’s an amazing guy. He’s very tuned in to what’s happening now and he’s a massive pop fan but also an incredible genius when it comes to being inside a studio environment. He’s just built a new studio where he lives, where we did a lot of the vocals but with [legendary London recording studios] RAK we got all the band in to create that big, chunky live sound.”

The daughter of 50s singing superstar Marty Wilde, Kim continues to keep her career very much a family thing. “My niece Scarlett did the album cover for Here Come The Aliens. I had a conversation with her about my experience of seeing lights in the sky. I said that maybe we should do something a bit retro, with a B-movie sci-fi vibe, so she went off and came up with the goods. I was absolutely gobsmacked when she showed me what she had done.

“I think the 80s have made such a big return – look at the Bananarama tour, and Bucks Fizz too. Also, a lot of artists are taking 80s references, such as The Killers and Muse. They are feeding off that 80s inspiration and also the 80s itself hasn’t really gone anywhere. If anything it is bigger now in 2018 than back then. It’s also people’s love of that 80s retro sound, which we have captured on the album without it sounding too retro. Pop is back! Pop music is something the UK should be, and is, very proud of. We have a great tradition of pop music, starting with The Beatles, and even before – you could say even starting with my dad! We’ve all grown up together but there’s also a whole new generation of people loving 80s sounds.”

It’s like a perfect storm for Kim. The album has been well received and lead-off single Pop Don’t Stop has been a massive airplay hit. “It’s been phenomenal,” she said. “I haven’t heard my record on the radio so much since the 80s. It’s a thrill to turn on the radio and hear my song coming out, especially as it is a duet with my brother [Ricky]. He’s always sung on my albums and he’s always had a beautiful voice – one of pop’s best kept secrets, and now everyone knows!.

“For the tour, we’ve got two drummers, so it’s huge, and sci-fi costumes. We’re going to have some fun and it’s all about the songs at the end of the day and we will sandwich the past with the present – greatest hits and some of our greatest hits to be.”

After nearly four decades in the business, I ask Kim what her personal highlights have been – and also the lows.

“The Michael Jackson tour in 1988 was incredible and touring with Bowie in 1990 was amazing. Further back into my career, winning the Brit Award in 1983 [for best British female],” she says. “Just generally getting to travel the world, playing live, selling records – basically getting paid for doing what I love most. It’s an incredible privilege. I’ve always felt I’m incredibly lucky and blessed with the life that I’ve had. Then to be able to still have a family and a husband and a marriage now that is nearly 22 years old – which is a bit of a record for people in this industry, not that it’s an endurance test (laughs) – and have two kids and a normal life.

"For me the biggest success is that I’ve kept my sense of humour and I’ve managed to combine having a family and a proper life that’s not about being Kim Wilde. It took me some time to understand that the low points, as I perceived them, were just points in my life from which I could learn something and grow. Getting older has definitely, for me, been something I have embraced and it has taught me how to be a happier person.” 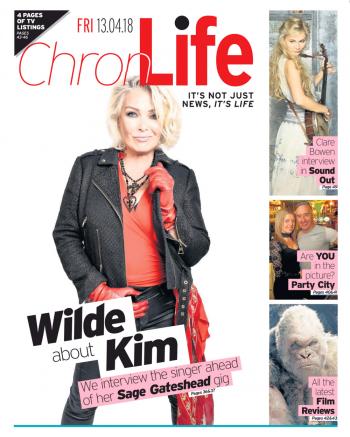 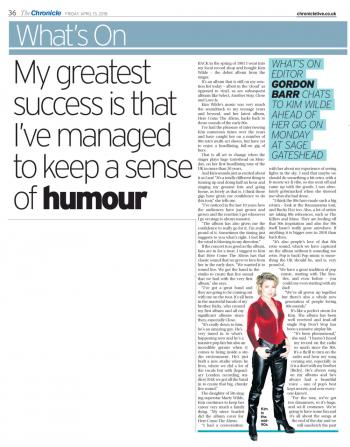 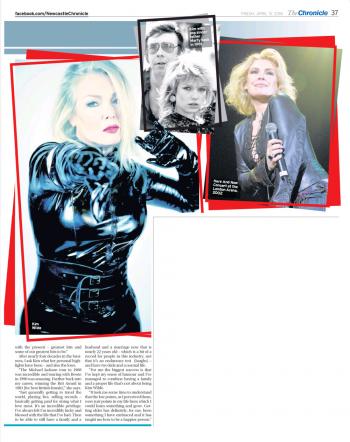