The 80s brought the music fans some cool and beautiful moments! There were at that time pretty much six female mega-music stars who literally twisted their heads ... Once upon a time there was the sexy "blondie" singer Debbie Harry (Marilyn Monroe sends her regards); then the German "Miss Wonder" Nena, who had her 99 balloons fly around the lighthouse. For those who liked a bit more hearty, the energetic Suzi Quatro (Hard) Rock Tube wrapped in black leather outfit ("Can The Can" / "48 Crash") was the perfect choice. But also the hard-rocking Joan Jett ("I Love Rock`n`Roll") was in a class of its own! In addition, there was the beautiful showgirl with the cheeky mouth, Desiree Nosbusch, which already with
15 years on ZDF had its own music show called "Music Box"! These five young ladies were all real eye-catchers! BUT HALT - of course, this list is missing a very big pop star from Great Britain - right: Kim Wilde! The mighty mega-pop star and the sex symbol with the peroxide-blonde, timeworn perfumed mane-barn, the luscious bright red pouty lips and the big, faithful looking deer eyes was visually the stereotypical appearance between self-assured pop bride and Brigitte Bardot replica. The wild Kim became known almost overnight almost around the globe. The dynamic synth pop tracks of Kim Wilde rotated on virtually every turntable. Her XXL hits such as "Water On Glass", "Cambodia" or "Chequered Love" (all 1981) as well as "You Keep Me Hangin`On" (1986) and "You Came" (1988) from the Wurlitzer roared across Europe -music boxes. Also in the same year then the biggest hit single of the pop princess Kim Wilde (born on November 18th, 1960 in Chiswick / West-London) was launched: "Kids in America"! This number was played up and down in every bar, pub, and game room; while thousands of boys (and some girls) eagerly crafted and glued together the Bravo issues of sexy star Kim Wilde before hanging them on the wall in their own kingdom. Pure nostalgia! Certainly the one or other pubescent schoolboy suffered from falling asleep when Kim Wilde stared deep into his eyes with her stunning look before falling asleep and hypnotized ...

Well then: the young pop-diva from England, Kim Wilde (57), did it again a few days ago, before maybe indulging in retiree life in a few years: the 13th studio album "Here come the aliens" (ear.MUSIC / phonag-records) became after 7-year record and CD Break brought to light! The rocking number "Kandy Krush" contains fat guitar riffs and reminds strongly of the splendor of Blondie. And "Addicted To You" is a playful disco catchy tune, while the opener "1969" sings about the Aliens & Co.

Conclusion: Kim Wilde imaginatively demonstrates with style, dignity and sophistication how a so-called pop diva can age without being ridiculous. The brand new CD part convinces and provides FUN and the first spring feelings!

Concert: On Wednesday, October 3, 2018, Kim Wilde will be guesting at the Volkshaus in Zurich. See you there... 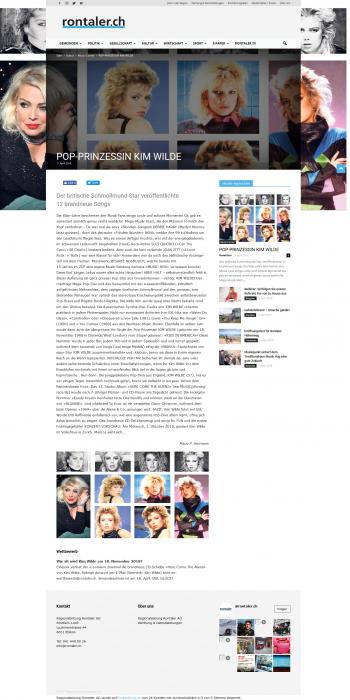