“It’s strange being 57 in a Barbarella outfit,” mused Kim Wilde on stage at a sold-out Koko.

In fact, the singer’s extraordinary costume was more biker cyborg than Barbarella, a skin-tight, embroidered, black leather jumpsuit with reflective knee pads and sequins, accessorised with silver boots. Did it look odd? Absolutely. Was it age-appropriate? Who cared?

Wilde’s first solo tour here for 30 years — her chart run lasted a lot longer in other parts of the world — was a barrel of fun and a fist-pump for female pop stars supposedly past their prime. It helped hugely that she had some superb new songs from her 14th studio album, Here Come The Aliens, which has returned her to radio and was just outside the Top 20 last month.

The middle-aged crowd may have come to be reminded of their teens, but most were familiar with the new material, if not quite prepared for how rocky it was. A six-piece band that included double drummers, Wilde’s younger brother, Ricky, on guitar and her bouncing niece, Scarlett, on backing vocals, thundered through new songs Stereo Shot, Kandy Krush and Birthday, all destined to be long-term staples of her set.

“I remember seeing Adam & the Ants on Top of the Pops with two drummers and thinking, one day, when I’m grown up, I’ll have them too,” said a beaming Wilde.

The bonus was that the band, keytar included, buffed up a barrage of Eighties classics. Water On Glass, Hangin’ On, Cambodia and Chequered Love were speeded up and sounded superb. Sadly, there was no way to save Another Step, a dire duet with Junior Giscombe that started a short, mid-set slump that included a pointless acoustic interlude.

View From A Bridge got things back on track, You Came was a highlight and the inevitable encore closer, Kids In America, was a riot. Wilde’s comeback is well under way. 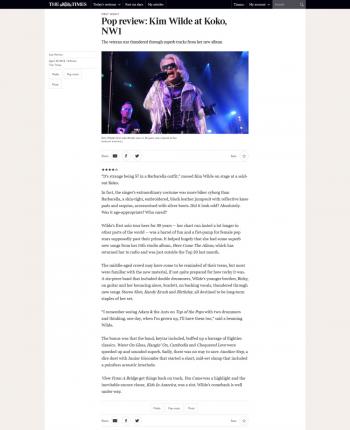 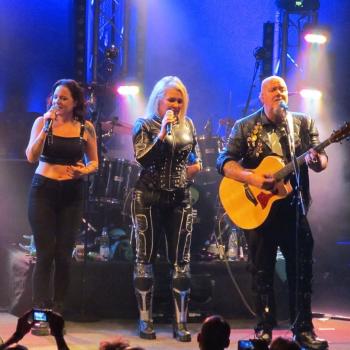 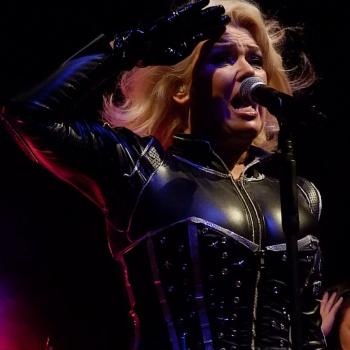