Quite the old one

The British pop singer Kim Wilde would like to continue her earlier success with her 13th album 'Here come the aliens'.

In the year 2001 Kim Wilde was inscribed in the Guinness Book of World Records. She transplanted a tree that was taller than any tree transplanted before then. The project, transplanting a tree from Belgium to the UK, was a success. World record. The tree fell victim to a thunderstorm years later. But then Kim Wilde was already back on stage.

Yes, the popstar from the Eighties had become a gardener. A very successful one, at that. She has written several books about gardening. She won awards for her projects and appeared as an expert on television.

But still Kim Wilde couldn't keep away from the microphone. The stage lights, the applause - how could a few bushes compete? Since the starts of the noughties she appeared on stage with other Eighties stars during revival tours. In 2003 a duet with Nena followed, which ended up in the top 10 in Germany. They recorded an English/German version of the Nena hit 'Irgendwie, irgendwo, irgendwann'. The motivation behind this wasn't hard to find: two popstars from a long forgotten age fighting agains musical insignificance. They haven't won.

Kim Wilde has does it once more now. It is the fourth attempt since her comeback 'Never say never' in 2006. And again nostalgia is playing the first violin. It starts right away. For 'Here come the aliens' Kim and her brother Ricky, whom she always works with, returned to the RAK studios in London. There the hit records 'Kim Wilde' and 'Select' were recorded.

The cover of the album is also dipped in retro style, resembling B-movie-posters. Title and motive don't want to be too obvious. They are brimming with Eighties references and have been built around a certain scheme. After a first, short verse a memorable refrain follows. For all, who need extra encouragement to tap along, there are oooh-screams in the right places. Smooth, without breakups or highlights - as the already released single 'Pop don't stop' seemed to give away. And so everything on the album sounds like a mix between Billy Idol and A-ha. Or even: like Kim Wilde used to sound.

She still has a good voice, no question. But the context is missing. The lyrics that seem to refer to current events ('Cyber.Nation.War') can't erase this impression. Polished Eighties pop/rock will get people in the concert halls, but not into the stadiums. Which is why Kim Wilde will not be stingy with the hits of the past when it comes to satisfying the audience on the upcoming tour. In the end everyone will want to hear 'Kids in America'. 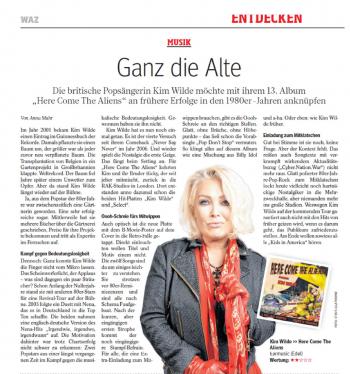