Singing along with Kim Wilde

Within 24 hours of the announcement, the concert in Gebr. the Nobel sold out. Kim Wilde still has a lot of fans. And they were not disappointed on Wednesday evening at her performance in Leiden.

'Kids in America', 'Chequered love', 'Cambodia', 'View from a bridge', all the big hits by Kim Wilde are presented. The English singer also understands that the audience is coming for that. Nice to sing along with those monster hits from the eighties.

Yet she knows how to skillfully interweave them with songs from her recent album 'Here come the aliens', which appeared half a year ago. Those new songs are certainly not bad. They also have that 80's sound, but in a slightly more contemporary way.

The title of the record refers to an experience she had in 2009. In a dark sky she saw inexplicable lights looming, which, according to her, indicate extraterrestrial life. Kim Wilde is convinced to have seen aliens. Very briefly she tells the Leiden public about it. ,,Do not be afraid! I will protect you."

Her tour is also a bit of extra-terrestrial creatures. An alien is depicted on the backs of the singer and her band members. At some point, masks also appear. Kim Wilde put on a tight black leather suit for her concert, as if she had just stepped off the bike. The applied frosting shows that we are really dealing with a pop diva here.

She has put on a decent band for her European tour. She shares the stage with seven musicians, including two drummers. It is also a bit of a family affair. Her brother Ricky stands with his guitar right next to her, like a rock. The backing vocals are provided by her niece. With the three of them they also do a few songs acoustically.

But usually a nice amount of sound is produced, with many synthesizers and drums as was customary in the eighties. Kim Wilde knows how to stand up well. She is still blessed with a good voice. If she ever misses a note, the peroxide blonde singer compensates with her infectious enthusiasm. She seems to genuinely enjoy it.

That is remarkable, because her career had an erratic course. In the nineties she turned away from the music. She went on to present a garden program on British television. After the turn of the century she made a comeback and together with colleague Nena she re-launched the charts with 'Anyplace, anywhere, anytime'.

With regained self-confidence, she is now on stage. Rightly so. The now 58-year-old singer brings the many forty- and fiftysomethings in the audience back to their youth. She is perhaps no longer the pop idol that at that time decorated many a boys' room on a poster-sized scale. The somewhat grumpy looking new-wave singer has become a good laugh rockchick of middle age. She also looks at herself with the necessary self-mockery. ,,Hello, I am Kim Wilde '', she says at the start of her almost two-hour performance against the crowded Gebr. the Nobel. ,, I am not the umpteenth tribute artist. Maybe I look a bit like her. But it's really me!"

After that she can not go wrong with the public. Which returns home charged and singing. 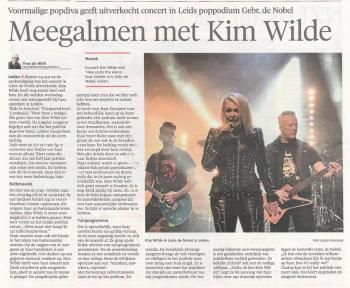 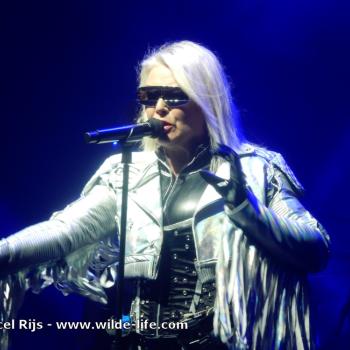 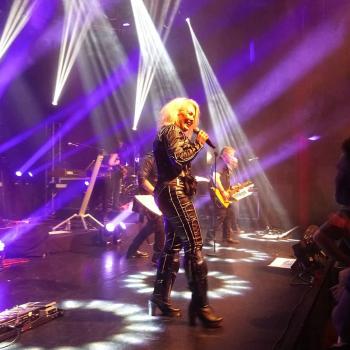