It’s certainly one way to stage a comeback. Back in 2012, Kim Wilde was a former Eighties pop star who had left fame behind to pursue a double career as a radio presenter and landscape gardener. But one night just before Christmas, she hurtled back into popular culture thanks to a drunken indiscretion. Coming back from a party on a London commuter train, sporting a pair of sparkly reindeer antlers, she launched into a slurred rendition of her first and most famous hit – 1981’s Kids in America – accompanied by her brother Ricky Wilde on guitar.

The performance was filmed by a fellow passenger, who placed it on YouTube, where the six-minute clip went viral. The then 52-year-old Wilde was mortified. “I was watching the viewing counter going up, and my future disappearing into a black hole,” she says.

In fact, it had the opposite effect, making the nation warm again to this spirited Eighties icon. The interest led to Wilde putting out an actual Christmas album, 'Wilde Winter Songbook', the following year. Her first UK release in nearly 20 years, the record featured a cover of 'Rockin' Around the Christmas Tree' with an accompanying video re-enacting Wilde's train antics. "I thought if two million people want to watch me drunk singing Christmas songs, maybe they'd be up for some sober versions", she laughs.

This, in turn, has led to a full-blown comeback. Wilde's new album, 'Here Come the Aliens', out in March, will be her first record of original songs since 1996. It is preceded by a single, 'Pop Don't Stop', which is all chunky rock guitars, thick synths, sultry verses and shout-along choruses. This spring, she will embark on her first British headline tour in more than 30 years.

"I was busy bringing up kids and being married", she says. "I lost my ambition. But then the kids buggered off to uni. And I thought, sod it, let's get back in the ring. I've still got some fight left in me."

What is clear is how much she is enjoying it. When I meet her in a London hotel, she is holding court in full pop star mode: black leather jacket, hair dyed blonde, vivid eyeliner and red lipstick. It's a transformation that was hastily executed on the train in from her Hertfordshire home, she explains. "You should have seen me this morning! My husband took me to the station and he had all the garden tools in the car. I was jostling for space with a bloody fork with mud all over it. Make-up is a wonderful way to transform from stressed mum. The Clarins liquid eyeliner takes over, and I enter into this parallel world. I can put on a black PVC suit and imagine I've beamed down from an alien spacecraft."

She describes Kim Wilde as "a super-persona: joyful, positive, passionate. It's a fanulous part of myself, the best I can be." It is refreshing how much Wilde seems to relish being a pop star. "Pop has given my life so much meaning", she says. "I grew up on the radio, I've always had the capacity to enter into a song and experience it fully, visually and emotionally. It's the one thing I can always go back to, that always makes sense of the world." This is the subject of 'Pop Don't Stop'. "When you lose your way you come back twice as strong / Here you come, you're number one", she sings. "Maybe that's a bit hopeful", she laughs. "It can be a roller-coaster career, but I never stopped loving music."

Wilde was a star at 20, talent-spotted by producer Mickie Most when she visited RAK studios to sing backing vocals for her songwriter brother. Her father, Marty Wilde, was an early British rock and roll star who wrote the lyrics for 'Kids in America', which went to number two in the British charts. With her sulky, new wave looks and bright, dynamic pop, Wilde quickly became a pin-up star. "I was up for it. Worrying about what people thought about the way I looked was a small price to pay for being in the studio, writing songs, performing."

She has no #MeToo stories of sexual exploitation. "I think I was lucky. I never felt at a disadvantage being a woman." She briefly dated Adam Ant in that first rush of stardom. "I was enchanted by him. I thought he was quite exceptionally brilliant. He took me to a very posh restaurant and spoiled me rotten. Then I think we might have gone home and watched our own videos! We were both a bit starstruck."

She had 17 UK top 40 singles in the Eighties, sold 30 million records, scored an American number one, and toured with Michael Jackson and David Bowie. "Michael was very isolated. You might be summoned for a photo-shoot and then dismissed. Stand there, flash and you're gone. David was lovely but he was falling in love with Iman, so his mind was clearly elsewhere." She rarely befriended her pop contemporaries. "We were all a bit shy and a bit arrogant. It's an affliction of age. By the time you outgrow it, it's too late. But I still get hopelessly starstruck. Elvis Costello is my pen pal now. His emails are longer than his songs."

Wilde got a taste of how fickle pop can be as early as 1985. "I was doing some TV in Newcastle and all these journalists came towards me. I remember thinking, 'I better get myself together'... and then they walked right past me. It was a real shock. They were all crowding round Jennifer Rush, who was the latest thing. I thought: 'Christ, that's the way it's going to be now."

She battled on but felt powerless to halt an inevitable decline. Turning 30, in 1990, she had what she has referred to as a breakdown. "I hit a brick wall. I was having a bit of a 'who am I?' crisis. I was exhausted." She credits renewing a childhood interest in gardening with recovering her mental health. "It became therapy to be outside. Nature restored me." In 1996, having lost her record deal, Wilde appeared in a West End production of Tommy, where she fell in love with and subsequently married her co-star Hal Fowler. She retired from music to focus on raising a family and study horticulture, leading to a surprising second career writing gardening books and presenting TV shows. "It filled a void that music had completely consumed. My spiritual life is all connected with horticulture. It teaches great lessons of patience and nurturing."

There is a kookiness to Wilde that suggest domestic life has never been as humdrum as she tries to make it sound. She claims to be psychic. "I've always been a great believer in magic, things that are unseen, intuition and other-worldly concepts." The day after Michael Jackson died in 2009, Wilde saw a UFO. "I know what it sounds like, Eighties pop star sees UFO in her back garden. But when i was standing there, it felt like a miracle. These two lights were moving very fast behind the clouds. I could feel the momentum change, like every atom was being moved." It provided inspiration for 'Here Come the Aliens'. "I felt a great benevolence from it. I feel like the aliens, or whoever they are, are protecting us. It energised and inspired me."

In the mid-Noughties, Wilde was tempted back into performing as part of an Eighties package tour. "I said no one wants to see a middle-aged housewife singing 'Kids in America'. But it turns out they do!" However, while she released some new music in Europe, she refrained from doing so in the UK: "It's so competitive here, I didn't have the energy to face the slings and arrows."

Her display of public drunkenness changed all that. Interestingly, she doesn't drink any more. "I was never tempted by drugs, but I do like champagne and nice wine... or any wine, really. My husband stopped drinking a few years ago and I thought maybe it was time to join him. The health benefits have been phenomenal. I feel fantastic."

She says there is not much reverence shown to her musical career at home but Wilde evidently delights in the contrast. "The moment I hit the stage, as far as I'm concerned, I'm the most incredible thing that's ever walked on the planet", she beams. "You'd never get up there if you didn't think that. And afterwards, the make-up comes off and I am back to being plain Mrs Fowler. And I'm happy with that, too. 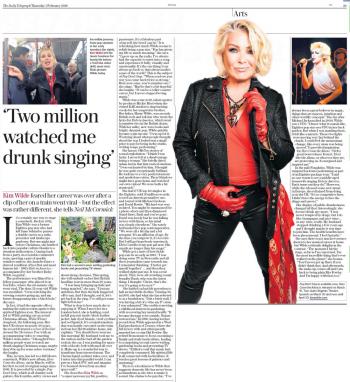