'Britain's Elvis' on surviving cancer, meeting the Queen, and his obsession with UFOs.

Teenager Reg Smith was singing for his supper at a Soho nightclub when fame came calling in 1957. The handsome lad would do his set, pick up his £1 fee and a bowl of spaghetti, then head straight back to his mum and dad's home in Blackheath, southeast London.

So the night starmaker Larry Parnes went backstage to sign "the next Elvis Presley", Reg was already on the bus home. But, thankfully, Britain's first rock 'n' roll manager was so impressed with the modest 17-year-old singer that he turned up at his home with a contract the next day.

Within months Reg had been groomed, styled and renamed Marty Wilde - teen idol and chart-topper wih hits like Endless Sleep, Donna and Teenager In Love.

Remarkably, Marty is still delighting fans six decades later and has just released a greatest hits album. And, despite a dicky heart and a brush with bladder cancer, he's about to embark on a nationwide tour to celebrate turning 80 on Monday. But the Father of British rock 'n' roll, and dad to Kids in America star Kim, is as down to earth and un-starry as ever. Although, he is obsessed with aeroplanes and UFOs - but more of that later. And, as we chat at his Hertfordshire home, he admits those days were far from wild and he never wanted to play the bad boy.

"My life changed overnight when Larry signed me," Marty explains. "He was a big deal, representing stars like Tommy Steele and Billy Fury, and he decided Reg Smith didn't have the right ring to it. So he made me Wilde - and Marty after a romantic hit movie. It was incredibly exciting as I'd been playing ukelele and guitar since I was 11 and believed totally in rock and roll. But I was an ordinary kid - an only child brought up in the war - and I had no idea what to expect. They took me up to town, cut my hair and changed my image. But that also cut me off from all the mater I'd grown up with. It turned out to be a very lonely existence. I was on the road, travelling up and down the country, and lost a lot of weight as I wasn't eating properly.

"Then things really kicked off after my first hit, Endless Sleep, in 1958. I started to get mobbed by fans and it could be really scary. I was doing a show in Hackney once and it was really difficult for them to get me out. There were over 1,000 screaming kids outside. I had my shirt literally ripped off my back once, and I lost my jacket a couple of times and ended up with scratches. We had to climb out of little tiny toilet windows and escape down an alley or they'd smuggle you out in a van. It certainly had its moments!"

With the girls literally throwing themselves at Marty did he ever dip a toe in the Sea of Love?
He shakes his head. "Because I got mobbed every time I went out it was easier to stay in my hotel room and order room service. People think stars of my generation were falling out of bars and beds all the time, but we were too knackered. You might chat to a girl but you didn't get chance to form any real friendships - let alone romantic relationships. And I think I was always looking for more."

He found it - in the shape of gorgeous Joyce Baker, a singer in The Vernons Girls who, like Marty, became regulars on ITV's Saturday pop show, Oh Boy!

"I met Joyce during rehearsals," he smiles. "I knew instantaneously she was the one. Despite people trying to dissuade me, we were married within a year, in 1959. Pop stars were discouraged from openly having girlfriends back then - let alone wives. I couldn't live like that."

But getting married had a huge impact on Marty's career and heart-throb status. "It was pretty clear I didn't have the same pull afterwards", he says. "Record sales dropped and not having hits was a huge disappointment. But becaue I had never taken the adulation too seriously, I didn't miss it. I was happy to live my life with Joyce and move on. She took over managing me - she's the business brains."

Marty was replaced as top teen idol by Cliff Richard. There were rumours that the singers' rivalry led to a feud, but Marty insists that they were always pals.

"I knew instantly he would be a star", says Marty. "We had similar backgrounds and the same work ethic and we hit it off. I felt terrible for him through all his recent troubles and sent him a message. He must be so relieved to have got his life back."

Marty went on to appear in films and West End musicals and wrote hit records for other stars including Lulu and Status Quo. And, once he and Joyce started their family, he was able to pass on the "musical DNA" he inherited from his own father.

"My dad Reg was a sergeant in the East Kent Regiment during the war and then a tram and bus driver. But he loved singing and had real musical flair and taught me to sing. I was 21 when he died. He was only 48 - a heart problem. It knocked the wind out of my sails. Family is really important to me."

Marty and Joyce have four kids, nine grandchildren and two great-grandchildren. Kim is now 58, son Ricky, 57, Roxanne, 39, and Marty Jr., 36. The eldest three are all in the music industry and Marty Jr is a sports psychologist and landscape gardener. Sitting in his study, Marty is surrounded by posters, photos, career memorabilia and his huge collection of guitars.

He says: "I still love music as much as ever and am thrilled I've been able to pass on my love of music to my children. Kim, obviously, has her career, and Ricky played with me on the road and wrote her early hits like Kids In America. Roxanne's also a singer and backing vocalist with Kylie Minogue."

Kim was a massive star in the 1980s, notching up 20 Top 40  hits, shifting 30 million records and supporting David Bowie and Michael Jackson on tour. She later became a gardener before making a pop comeback. And last year she released her 14th studio album called Here Come The Aliens - inspired, she revealed, by her encounter with a UFO in her garden in 2009.

Was Dad upset at all the mickey-taking it prompted?
"Oh no", says Marty, "because she gets all that from me. I've studied UFOs for years. I think there are aliens in this country - and certainly in America, though not necessarily alive. I think the Americans have got the ones that have been in crashes. But I don't know if I'll ever meet one."

Marty's own journey through stardom has been just as fascinating. And he had a close encounter with his own mortality 20 years ago. "I noticed tiny flecks of blood in my urine - very scary", he says. "But I went to see my doctor and... within a week I was in hospital having an operation for bladder cancer. I had chemo, went back to checks every six months for a few years but then I got the all clear. I was very lucky. I'd given up cigarettes 10 years ealier but I was a huge smoker - before that, 50-a-day - and that's what caused it. I've had a back op too, and I have a heart condition, but I'm still in fine fettle. Performing is still such a buzz - it gives me real energy."

In 2016 Marty was awarded the MBE for services to music and was delighted when the Queen herself presented it to him at Buckingham Palace.
"What an honour!", he says. "I'm 100 per cent a royalist and I think the Queen is fantastic. When she pinned on the medal she asked me if I was still going strong. It was a surreal moment - one I could never have imagined when I started out singing for a quid and a bowl of spaghetti."

Not in his wildest dreams. 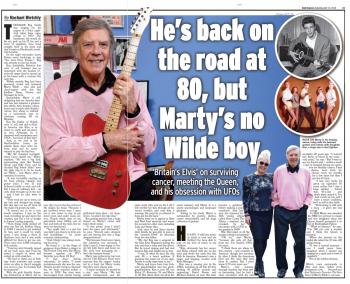