Born in London, Wilde, 58, is the daughter of singers Marty Wilde and Joyce Baker. In 1981 her debut single, Kids In America, was a global hit and she went on to sell 30m records. She continues to record and perform music, and is also an award-winning gardener (and former Weekend columnist). Aliens Live, her first live album, is out on 16 August. She is married with two children and lives in Hertfordshire.

When were you happiest?
These are the happiest days. I love the process of getting older and, sometimes, wiser.

What is your earliest memory?
The winter of 1963. I was three and I think that’s when my love affair with all things snowy began.

Which living person do you most admire and why?
Greta Thunberg. She has reached into the hearts and minds of people all over the world and woken them up to the terrible impact we are having on our planet. What a fascinating force of nature she is.

What is the trait you most deplore in yourself?
I get pretty panicky when I have to do anything that requires logical thinking.

What is the trait you most deplore in others?
I don’t like judgmental people.

What was your most embarrassing moment?
Being filmed very drunk, singing on a train at Christmas wearing antlers. That was seven years ago; it went viral. It’s crushingly embarrassing; my daughter sometimes puts it up on her laptop to wind me up, and I have to leave the room.

What is your most treasured possession?
A box of poetry from when I first met my husband, Hal.

What would your superpower be?
I think I have the ability to heal.

What do you most dislike about your appearance?
As I have got older, there’s a little bit more of me to love than there used to be.

What did you want to be when you were growing up?
A pop star: I loved music from a very young age.

What is top of your bucket list?
I would like to go to the Little A’Le’Inn. It’s near Area 51 in Nevada where, apparently, UFO stuff goes on and there are aliens actually resident.

What was the best kiss of your life?
The first kiss with Hal. It was a very sweet moment. I was dashing off to get a car home and he was going to wander back into the crowd that we were leaving, and somehow our lips found each other.

What is the worst job you’ve ever done?
I’ve always enjoyed all my jobs, whether it was cleaning the stairs for my piano teacher or working at Lister hospital one summer.

If you could edit your past, what would you change?
There are several boyfriends I wish our paths had not crossed.

How do you relax?
Gardening.

What is the closest you’ve ever come to death?
When I was three and had meningitis.

What single thing would improve the quality of your life?
Not drinking alcohol.

What keeps you awake at night?
I sleep very soundly.

Where would you most like to be right now?
Planting the rose that I have found a spot for in the garden. 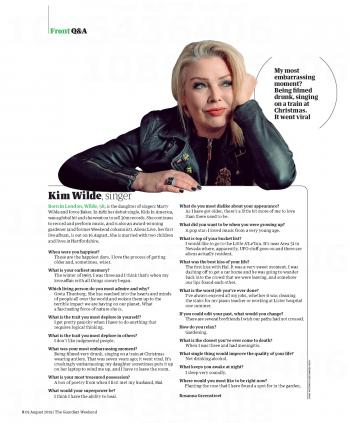