The presenter believes that today's music does not provide material for future retro shows. Unfortunately it is false.

Kim Wilde. Chris Norman. Nick Kershaw. Peter Schilling. Thomas Anders. Marc Almond. Whoever falls in esctatic memory for these names has a good Saturday in front of him: there is namely at 20:15 clock at ZDF one of this kind occupied "tribute to an unforgettable decade".

That is, of course, the 80s, currently in Hollywood (one remake chasing the other), the streaming television ("Stranger Things") and of course in the music world as a gold donkey, er, be milked, as much as that goes.

Because who was a child at the time, has now accumulated enough household income to invest it in memory moments with Nostalgia tax.

No wonder then that moderator Thomas Gottschalk - also a product of this decade - much of what was then in the German and Austrian charts played up and down, gathered around. The music of that time, he says in the promo for the show, "still works today." How true.

So moved, however, Gottschalk sits in the next breath of the mother of all cultural errors: "I am convinced," he says, "that in 2050 will not make such a program about the Noughties or about what in 2019 was musically on the way. I do not think that Ariana Grande will appear on any show then either." A wonderful saga to catch on. Because music transfiguration, no matter what decade it affects, is mainly a statistical problem that you easily sit on, but you can also easily help.

In retrospect, the love of the music of a decade collapses quickly under the pressure of everyday charts. A few handful of memorable songs face many, many, many others.

1988 was the most successful song by Milli Vanilli, which then turned out to be a fake band, 1989 by, well, David Hasselhoff. Number 9 in 1987: "Guten Morgen, liebe Sorgen". The ratio of standout to meter was once the same as it is today. Only one hears the meter goods of today constantly, whose predecessors have already been graciously given to oblivion.

It is not surprising that the nuances of the noughties have passed those who have already left the current pop scene. The decade was very productive: "Kid A" by Radiohead, "Back To Black" by Amy Winehouse, the black album or "Blueprint" by Jay Z, the White Stripes and much of Kanye West are artistically well. Also suitable for later nostalgia are the Zero Years of U2, Coldplay, Justin Timberlake, Norah Jones, Alicia Keys, James Blunt. And so on. Pop music works through the emotional charge that you give it - and just as the Saturday night television show invites the next generation, the generation after the next, to bring their music to life.

And who was there knows: now brought out acts like Thomas Anders (Modern Talking!) or Kim Wilde would have been glad in the 1980s, if someone had taken them as seriously as today Ariana Grande is taken seriously. 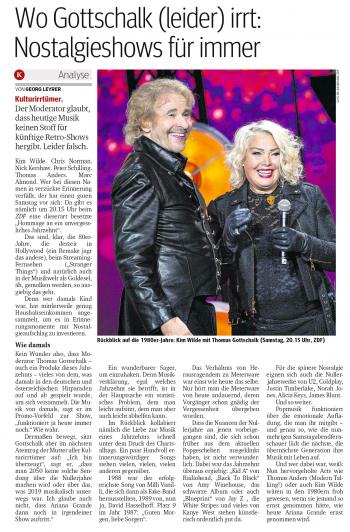