Exactly 31 years ago today, on November 12, 1984, Kim Wilde released her fourth studio album Teases & dares. Along with the album, Kim was paired up with the team of XL Design to create a new and exciting image. This week's Throwback Thursday picture shows you the result: gone were the jeans and t-shirts, and the 'girl next door' image from 1981 and 1982, as well as the sexier, leather-clad look from 1983. The new Kim Wilde wore short skirts, colourful shirts and strange plastic jackets. And don't forget the gloves, in primary colours, of course.

Kim often commented - from 1985 onwards - that in hindsight she didn't really like this new image, but adding: 'I'll try anything once'. As was noted before, it's a good thing Kim tried this once, otherwise this whole website might never have existed. But the whole project distracted the world from the actual music. Recent live concerts have proven that songs like 'The second time' and 'The touch' have stood the test of time. It's time that more songs from the 1984 album are resurrected - without the colourful image this time. 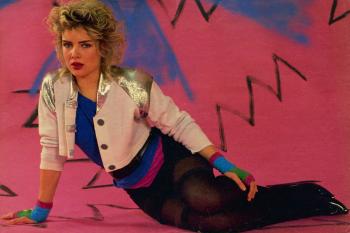