Every Thursday we like to take a picture out of the archive and have a look at it more closely. This week's pick was inspired by Kim's younger sister Roxanne's birthday which is due to take place tomorrow.

This photograph was taken by Katrien Vercaigne backstage at Den Atelier in Luxembourg on March 11, 2007, one of the dates of the Perfect Girl tour. Roxanne was doing backing vocals for Kim during this tour, but on this very date, her later successor Scarlett actually joined her on stage to perform backing vocal duties with her. Roxanne went on to do backing vocals for Kylie Minogue, a job she took on in 2008 and has continued to do until now. She appears on the live dvd's of Kylie's live shows, most recently the 'Kiss me once - Live at the SSE Hydro' spectacle. She got married in 2009 and had a son, Theo, in 2013. 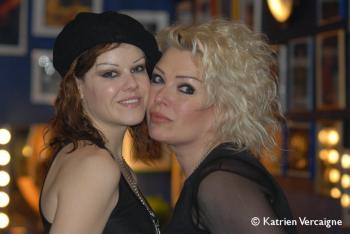