Christmas is upon us. Tonight it's Christmas Eve and tomorrow is Christmas Day. In our gallery of Christmas images you can find just about all the Christmas photographs of Kim Wilde you need. But since we're all dreaming of a white Christmas, we thought it would be nice to roll back to 2013, when this photograph was made by Paul Archer.

It wasn't actually made during Christmas 2013, but at the beginning of the year, when it was actually snowing in the UK. The photo was used for the promotion of 'Wilde Winter Songbook' when it was first released: in November 2013. 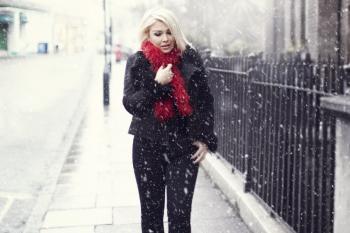