As we are approaching the end of 2015, it's a good day to look back in time and see what Kim did on New Year's Eve in previous years. Older fans will probably remember the broadcast of the First Time Out documentary on New Year's Eve in 1982. Then, in 1986, Kim Wilde fans were treated to part of a live concert on BBC television during the turn of the year in the Old Grey Whistle Test. In 1990, fans had to wait until after midnight to see Kim in Vic Reeves New Year's Eve Big Night Out, appearing in a sketch and singing part of a Vic Reeves song.

Fast forward to 2011, and Kim does something even more out of the ordinary: she flew to Berlin to appear in the German programme Willkommen 2012, singing 'Cambodia' and 'Kids in America' live in front of the Brandenburger Tor. That's where this week's Throwback Thursday photo was taken. 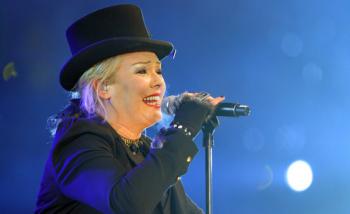