Kim Wilde is on holiday, which is why things have been a bit silent lately. She hasn't presented her radio show on Magic FM last Sunday, and although the syndicated 80's show is still running on radio stations all over Europe, there is a definite lull in the Wilde world.

Flashback to 1986, when Kim was at Reunion Island, recording a TV special for French television. There was some time to relax, as this picture shows. The photo (or some version of it) appeared in an article in Salut! magazine, on July 16, 1986. 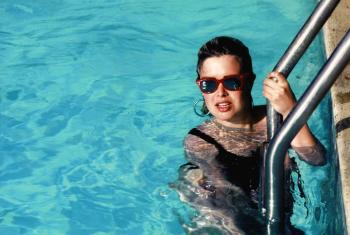