In the summer of 1998, three girls - Natalie Kington, Fran Chapman and Anna Williamson - recorded a track called 'Feel my vibe' at Select Sound Studios. The track was produced by Ricky Wilde and J. Tooley, who also wrote the track. The cd-single, featuring 6 versions of the track, was released on the new Solo Records label. The most remarkable thing about the record was that it was funded by a certain Helen Deakin-Davies, a mother of two who, just a year before the release, knew nothing about the music industry and took out a loan with the bank for £50,000 in order to get this record released.

The idea came about when her husband Steve, who produced spoken word tapes, decided to cash in on the girl band phenomenon by making a cassette telling wannabe Spice Girls how to set up a pop group. He needed a fictional band and asked his babysitter to sing on the tape together with some friends. When Helen heard them, she decided on the spot that they could become famous.

"I'm not in it for the money", she said at the time. "But I'd like to pay off the mortgage. I'm confident it's going to work". Unfortunately, the single didn't sell the 70,000 copies it needed to get to the break even point and 'Feel my vibe' remains Blush's release. Helen Deakin-Davies might have lost her £200,000 home as a result of the bank loan in the end, but whether this actually happened we don't know. We do know, however, that one of the girls, Anna Williamson, ended up being a TV presenter for Channel 5, GMTV and Children's ITV. 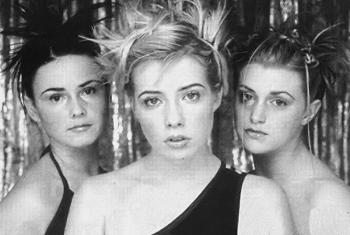 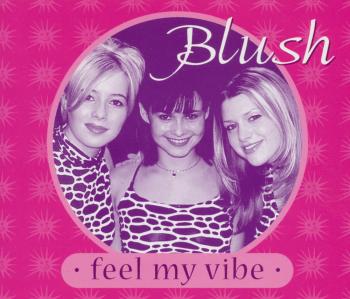 The cd-single 'Feel my vibe'