In last week's edition we talked about Status Quo, a band that is still going strong in the UK. But Marty Wilde wrote songs for many other acts. When we mention the name of the band Capricorn, many people will wonder who the heck they are.Capricorn consisted of Sue Avory (lead vocals), Unwin Brown (drums), Colin Travers (guitar) and Steve Pryor (bass). The band was much more popular in Japan than they were in the UK.

Their first single was 'Hello Liverpool', a song written by Marty Wilde and Ronnie Scott. It features the song 'How did you find me', written by the same duo, on the B-side. It reached number 1 in the Japanese singles chart. The single was released in 1970, two years before the band won the World Popular Song Festival in Japan, representing the UK with the song 'Feeling'. A couple of years later the band split up. As far as we know, the band's debut single was the only Wilde connection for Capricorn. You can listen to the song below. 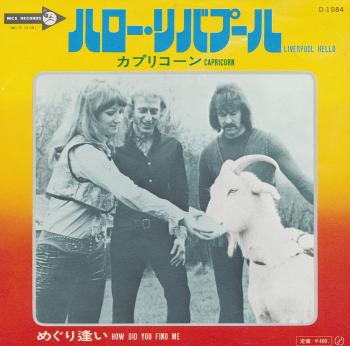