In a previous installment of our series Wilde World we mentioned Pete Shelley, a man with whom Marty Wilde wrote many songs for other artists. No mentions of him so far, but this week's song is one of the results of their fruitful collaboration. Albeit it's a bit of a bizarre result.

Zenda Jacks was born as Sue McCloskey on May 7, 1955 in Wednesbury, Sandwell (UK). She was discovered during her late teens when she was singing at a birthday party and recruited for the Birmingham-based band the Muscles. Performing with them, she was subsequently discovered by nightclub owner Peter Stringfellow, who became her manager. In 1974, she signed a recording contract with Magnet Records. Her debut single 'Rub my tummy' - written by Marty Wilde and Pete Shelley - was released before the end of the year. She was marketed as 'The goddess of rock' and quickly made a name for herself in the glamrock scene at the time. Pete Shelley also wrote her second single 'Earthquake'; her third single 'Do you love me' was produced by Pete Waterman. After this, Zenda Jacks joined the trio Silver Convention, who represented Germany in the 1977 Eurovision Song Contest with the song 'Telegram'.

Basically, her working with Marty Wilde was a one-off, but it resulted in a rather remarkable song. You can see a performance in the Dutch television show Toppop from early 1975 here: 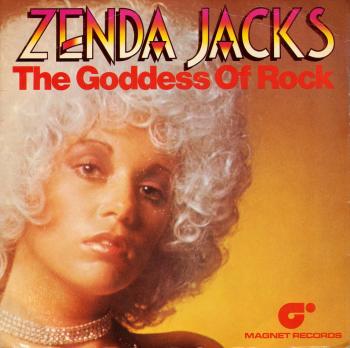 The single 'Rub my tummy'