The Breakaways formed in 1962 with original members Vicki Haseman, Margot Quantrell, Barbara Moore and Betty Prescott. They were originally members of the Vernons Girls, where Kim's mum Joyce also enjoyed some success. All this could explain why Marty Wilde got involved: he wrote the B-side 'Your kind of love' for the Breakaways in 1965. By then, Prescott was replaced by Jean Ryder. Vicki Haseman got married to Joe Brown and became pregnant in 1964 (giving birth to Sam Brown of 'Stop!' fame in October of that year), to be replaced by original member Betty Prescott.

'Your kind of love' appeared on the B-side of the group's fourth single 'Danny Boy', a version of the Frederic Weatherly song to the Irish tune of the 'Londonderry Air'. You can listen to the song below. 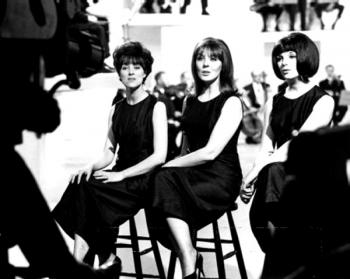