Marty Wilde and Pete Shelley had several projects on the Magnet label, and some were more successful than others. The song 'Attack attack' had a nice glamrock feel, and was recorded by an unknown group called Yellow bird, but it failed to make a dent in the singles chart. That's probably why nothing was ever heard of the band again, although the B-side 'Right on' surfaced as an A-side on a single by Zappo, which was a nickname for Marty Wilde himself, in the same year.

What the hell was going on? If Yellow bird was a project of Shelley and Wilde, who were the five chaps on the single's sleeve? Some things have yet to be discovered.
Meanwhile, you can listen to 'Attack attack' below. 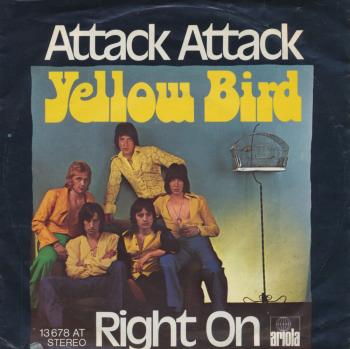