Born in Chiswick, London on December 3, 1952, Mel Smith was an English comedian, actor, film director, writer, and producer. His father owned a greengrocers store in Chiswick, which he turned into the first betting shop there when the government legalised High Street betting. Smith was born and raised over the shop, and was educated at Hogarth Primary School, Chiswick, Latymer Upper School and New College, Oxford. He produced 'The Tempest', while at the University of Oxford, and this led to him joining the Royal Court Theatre production team in London, followed by Bristol Old Vic. He was also associate director of Sheffield's Crucible Theatre for two years. Later, he directed a theatre production of 'Not in Front of the Audience'.

When Smith was at Oxford, he performed at the Edinburgh Fringe with the Oxford University Dramatic Society. One year they shared a venue with the Cambridge Footlights, directed by John Lloyd. Lloyd later got the opportunity to develop the idea which became the satirical BBC television series 'Not the Nine O'clock News'. Lloyd rang Smith to ask if he wanted to do it, to which Smith agreed for £100 an episode. This was followed briefly by 'Smith and Goody' (together with Bob Goody) and then the comedy sketch series 'Alas Smith and Jones', co-starring Griff Rhys Jones, its title being a pun on the name of the American TV series Alias Smith and Jones.

In 1981, Smith and Griff Rhys Jones founded TalkBack Productions, a company which has produced many of the most significant British comedy shows of the past two decades, including 'Smack the Pony', 'Da Ali G Show', 'I'm Alan Partridge' and 'Big Train'. They also developed the company to manage other acts, including Matt Lucas and David Walliams of "Little Britain" fame. In 2000, they sold the company to Pearson for £62 million.

In 1987, he recorded a single with Kim Wilde for Comic Relief, a cover of the Christmas song Rockin' around the Christmas tree, containing some extra comedy lines written by Smith and Rhys Jones.

Smith co-wrote and had the lead role in the space comedy 'Morons from Outer Space' but the film failed to make much impact. Next he directed 'The Tall Guy', giving Emma Thompson a major screen role. Perhaps his best-known motion picture in America is 'Brain Donors', the 1992 update of the comedy classic 'A Night at the Opera', starring Smith as a cheeky, opportunistic cab driver turned ballet promoter. Paramount Pictures considered this film the outstanding comedy of the year, but when the producers left Paramount for another studio, Paramount withdrew its support for the movie.

Smith and Jones were reunited in 2005 for a review/revival of their previous TV series in 'The Alas Smith And Jones Sketchbook'.

Smith then returned to the theatre stage after some 20 years in August 2006, appearing at the Edinburgh Fringe festival in Irish journalist and author Mary Kenny's play about Churchill's encounter with the Irish nationalist leader Michael Collins in 1921. The play initially caused some controversy, with Smith proposing to flout the Scottish ban on smoking in public places, but the scene was quickly adapted after gaining the required amount of publicity. The play was directed by Brian Gilbert and produced by Daniel Jewel.

In Autumn 2006, Smith starred opposite Belinda Lang in a tour of a new comedy 'An Hour and a Half Late' by French playwright Gérald Sibleyras, and adapted by Smith. He then directed a West End revival of 'Charley's Aunt' starring Stephen Tompkinson.

On July 19, 2013 Mel Smith unexpectedly died of a heart attack in his home in St John's Wood, London. 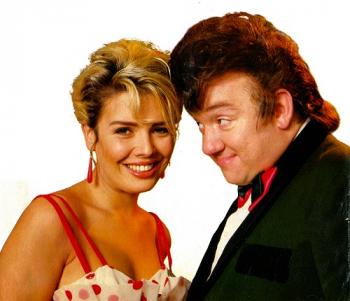