Take That was one of England's most popular bands in the first half of the nineties, and thanks to a loyal following of mostly young girls they had a lot of number one hits.
Gary Barlow (born January 20, 1971, Frodsham, Cheshire, England), Mark Owen (born January 27, 1974), Howard Paul Donald (born April 28, 1968, Droylsden, Manchester, England), Jason Thomas Orange (born July 10, 1970, Manchester, England) and Robbie Williams (born February 13, 1974, Port Vale, England) formed the group in Manchester, England. They attracted some attention with the release of their debut single "Do what U like" on their own label in July 1991. The press attention was mainly focused on the nudity in the accompanying video, in which the boys showed their buttocks.

The interest of RCA Records was soon attracted as well, and they signed them on in September of the same year. June 1992 brought the group their first UK chart hit with "It only takes a minute", formerly performed by Tavares in the seventies. The single was the first indication of the hugely successful "Take That and Party" album, which entered the album charts on number 5 in the UK. The single "A million love songs" reached number 7 in the singles charts, and by the end of the year most popularity polls indicated that the youth of England had fallen for the five cleancut boys.

In 1993, the album "Take That and Party" climbed to number 2 in the UK album charts, and the single "Could it be magic" reached number 3. In April the single "It only takes a minute" and the album were released in the United States, but the releases were very unsuccessful. Meanwhile, "Pray" and "Relight my fire" became number 1 hits in the UK, officially establishing Take That as the most popular group of 1993.
When the album "Everything changes" was released in October, it debuted at number 1 in the UK album charts. In December, "Babe" became their third charttopper.
While the group remained successful in 1994 and 1995, with further number 1 hits like "Sure" and "Back for good", the group decided to call it quits when a Greatest Hits compilation was released in 1996. The last single was a Bee Gees cover, "How deep is your love". Meanwhile, Robbie Williams was kicked out of the group, supposedly for drug abuse.
After the group split, Gary Barlow and Mark Owen took a stab at a solo career, but neither of them were as successful as the group had been. Robbie Williams was more successful and has already released several millionselling albums.

In 2006, Take That reformed - albeit without Robbie Williams, who was suffering from a depression and addiction problems - and seemed to pick up their fame without trouble. Hits like 'Patience' and 'Rule the world' confirmed their status as one of Britain's most successful male groups. Their most recent album did see them reform with Robbie Williams. Released in 2010, 'Progress' was destined to become a phenomenal success.

Kim Wilde has stated a few times that she liked Take That.

Kim about Take That

I've met them a few times and swooned hopelessly all afternoon - but, of course, they're too young for me... aren't they? (1)

They're quite good really, aren't they? I love their records and I met them a few weeks ago, met Jason... (sighs) (2) 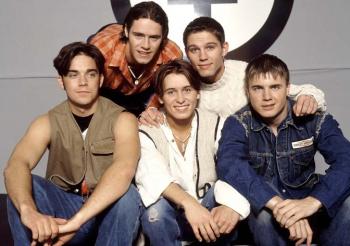