Tiktak was a Finnish music group consisting of six school girls from northern Helsinki, who met at a band school in Helsinki. Their debut album, "Friends", included songs written by Maki Kolehmainen (of Aikakone) and was a huge hit in Finland, with unusually strong sales in the rest of Europe, especially Russia and Scandinavia. The band's music was a blend of rock and pop. Each of the girls played their own instruments with the exception of Petra who was the lead singer. The band gained great domestic popularity.

In 2001, they released their second album "Jotain muuta", which contained the track Kaupungin lapset, a Finnish language cover of Kids in America. The bilingual version "Jotain muuta...ja jotain uutta!" ("Something else... and something new!"), released in 2002, contained both a Finnish-language and an English-language version. They performed Kids in America together with Kim only once, during Fashion Night, a television broadcast in Finland on January 25, 2002.

The band decided to break up in 2007 with the last performance in December 2007.

Guitarist and vocalist Emilia "Emppu" Suhonen is also the vocalist for Dame, whose first album, "So Was It Worth Dying For", was released in June 2006. 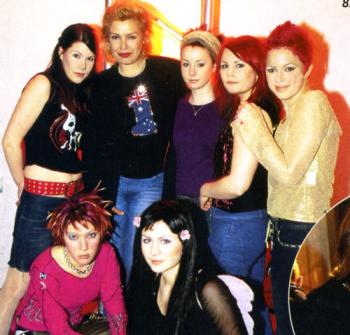