Released in France in 1985 on RAK records, this album was the only European compilation to include Bitter is better, and can thus be considered a rarity.
The compilation was quite different from The very best of Kim Wilde and was perhaps a better introduction to Kim Wilde's EMI period as it was more balanced than that compilation.

This album contains the tracks Cambodia, 2 6 5 8 0, Bitter is better, Back street Joe, Stay awhile, Just a feeling, Chaos at the airport, Tuning in tuning on, Love blonde, Water on glass, Young heroes, Boys, Words fell down, Ego, You'll never be so wrong and Kids in America.

'Top 16' was released on LP and tape.
See also this page in the discography. 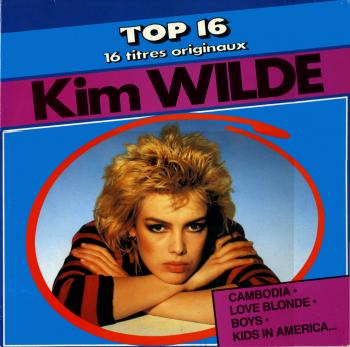