On December 13, 2012, Kim and Ricky Wilde went to the annual Magic FM Christmas party, bringing a guitar since they were singing a few songs during the evening. On the way home, they took the train decided to sing a couple of songs, Kids in America and Rockin' around the Christmas tree. The event left most of the fellow passengers cold, but one fellow passenger, Katherine Eames, decided to film the whole thing. She uploaded the video to YouTube, and within a week it was seen by 1 million people!

"It was a late night train and I was on it with my brother, Ricky Wilde and a guitar. And we decided to serenade the coach on our way home from a rather fabulous party that Magic threw in town. We had sung a couple of songs for the crowd there: ‘Kids in America’ and ‘Rockin’ around the Christmas tree’ with Ricky playing guitar, me singing. So we decided to recreate it on the train going home, like you do. We had some very funny reactions from some of the people on the carriage. Some of them looked quite pleased to see me, others really didn’t. This resulted into quite an overwhelming reaction. With the video going viral on YouTube and everywhere, on the news and in the newspapers. I just can’t get my head ‘round it. (...) I really hope the people on the train didn’t mind me getting up and singing to them, although some of them didn’t like it very much. A few million other people seemed to have just loved it!" (1)

"Do you know what, I couldn't believe that happened. I mean, I was a bit de-mob happy. We got on the train, and I said to Rick, 'Come on, it's Christmas, I've got antlers, you have got a guitar, what can possibly go wrong? And I saw this girl filming halfway through, but I was fairly larruped (drunk), and at that point I really didn't care that she was filming. I thought, she will only show her mum anyway. And then we got home and then the phone started. And then my husband went on and started watching the clicks go up on the viewings, and before we knew it, within a few weeks, two million people had watched me get absolutely larruped." (2) 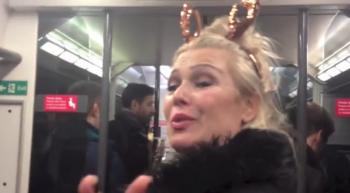