In an unexpected turn of events, the website Kim Wilde Daily has returned.

Many fans will be unaware of this, but the daily blog Kim Wilde Daily has been reactivated since January 1 this year. Located at the address kimwilde.tumblr.com, the blog was active between June 2011 and April 2012, until it suddenly announced its closure in May 2012.

It seems the blog has come alive again, because a new posting has appeared every day since January 1. The site still leans heavily on other website, with postings linking to Kim's twitter account, Instagram, YouTube and indeed this very website, Wilde Life. It remains to be seen whether the site will remain active for the rest of the year, when not much activity is expected from Kim until the first live dates in June.

Kim Wilde Daily already mentions other Kim Wilde websites which it is likely to link to in the coming weeks, such as day-by-day-kim-wilde.over-blog.com, www.kimwilde.com, www.kim-wilde.net ('New website soon!') or www.wilde-life.com. Hopefully the blog will be a nice daily present for all Kim WIlde fans, just like Wilde Life tries to be. 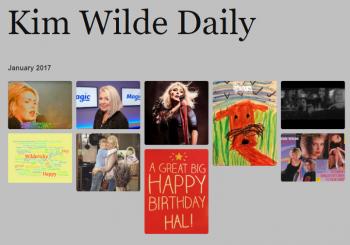