My friend Steve... a man of extremes.

We asked Sabrina Winter, a close friend of Steve Byrd, to write down her memories of him. It became a beautiful piece, which we present to you here in its entirity.

I first met Steve in my teenage years when I was following my idol, Kim Wilde around the country, whenever she played shows in Germany. Steve always stopped for a little chat with me and my friends whilst we waited for the doors to open at venues and studios alike. He was always friendly, always helpful, always caring.
Occasionally, a whole bunch of us including Kim & her band went out after the gigs, for drinks and a little dance at hotel bars and clubs. Whenever I hear “Groove Is In The Heart” these days I automatically think of Steve. That was our favourite tune to dance to back in the day. It was in the late 80s/early 90s but it feels like yesterday. I can’t believe that this was more than 30 years ago.

Steve made me laugh a lot. But he could also make me so angry sometimes. Yet even when he did so, perhaps by saying something to provoke me in some way, I knew deep in my heart that his main focus was to see me happy. I find that hard to explain although I'm sure his friends and family know exactly what I'm talking about.

Steve was an extremely talented guitarist and songwriter; a lover of music but a hater of the industry.
He was extremely passionate. Passionate about music, about supporting new talent, about love, about politics, about injustice in the world. He had his opinions and he made them very clear without any fear of the possible consequences.
You wouldn’t have wanted to be next to him in a car. He loved to drive extremely fast. I held my breath uncountable times whilst being his front-seat passenger.
He loved guns and weapons but was a strict vegetarian. And I know that the only pigeons he shot were of clay.

Steve flirted with angels and struggled with demons throughout his life. He was a man that enjoyed going from one extreme to the next. Sound weird? Sound extreme? Well, that is Steve Byrd for you! I personally think he had to be extreme to be so extremely good, as a musician, as a friend and as a motivator.

Steve believed in me and my music when no one else did, not even me. Only a few days ago Steve texted me: “I was thinking of you as a teenager, outside in the cold. It is so nice to see you grow from that girl to the fabulous woman you are now. It really fills me with pride”.
My songs, “Sweetest Of All Darlings” and “Thorn In My Heart” would have never seen the light of day without him, his belief and his support.
We recorded a few more songs, especially in the early 90s. Those tracks were always precious and special to me. Now more so than ever!

I wish for him that he is now playing in this super group up there (wherever that place is) next to his idols Hendrix & Bowie. When Bowie died earlier this year Steve texted me: “How the fuck was David allowed to die so young, hon? I'm still fucking weeping as I type!”  If he only knew how many people are now weeping over him. It would have meant the world to him. Hopefully his demons are now hanging their heads in shame.

Steve, even if you are not here anymore you will always be with me here in my heart and in my thoughts, my darling friend.
Sleep tight, Byrdman. I will extremely miss you!!! 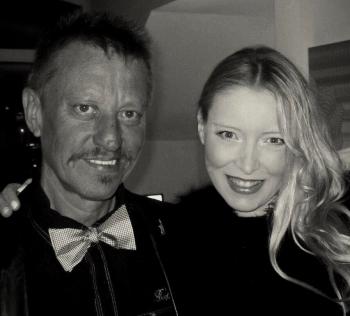