All through this year, the focus is on Kim Wilde's 40 year career. It's a great oppurtinity to do a retrospective journey through her work from 1981 until now. For that occasion Wilde Tapes proudly presents the new series called 'Let's celebrate'.

This exclusive series will bring you some rare audio and video recordings from the last 40 years. You will be able to listen to some versions of your favourite tracks that have been sung live only ocasionally, or see rare and previously unseen videos (such as this Chequered Love Shower Version video. This is the perfect time to present all this exclusive materials and prepare for Greatest Hits tour which will take place later this year.

There's lots more to come, so keep your eyes peeled, and don't forget to subscribe to the Wilde Tapes YouTube channel. 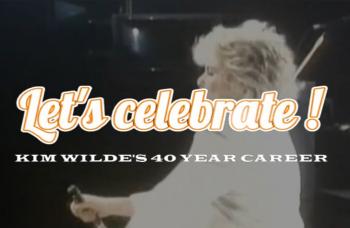