Your new single, 'Rage to love', it's very rock 'n' roll-ish. Has your dad helped you with that at all?
Yeah, Marty wrote it with Ricky and they've written all the hit singles up until now, so he had quite a lot to do with it really.

How did you get started in the music world?
Um... How did I get started? Well the first record that I had was 'Kids in America' and that really launched the whole thing. We just did that in our spare time in a little studio near to where we lived. We weren't thinking of any big plans.

If your family hadn't been in the music world, would you have taken the same lines?
I don't really know. What do your parents do?

My dad's a cyclist and a teacher, and my mum owns a winebar.
Right, well (laughs) I really don't know if that has any relevance to what you're doing now and I think it's the same with my dad, although he was in the music business where I am too. I don't really think that there is much relevance, because I wanted to go into it a hell of a lot anyway when I was really small.

Who designs your clothes?
This is second hand. This is a second hand jacket that I've found, very luckily. It's in pretty good condition, considering it's been around for quite a few years actually.

It's great.
Thank you.

Now then, we've had some questions from our viewers. There's one from Kathy O'Mardy of Blackham in Chester. And she wants to know 'What's your favourite song that you've done'?
I think 'Kids in America' and the new one, 'Rage to love'

(Video for 'Rage to love' starts.) 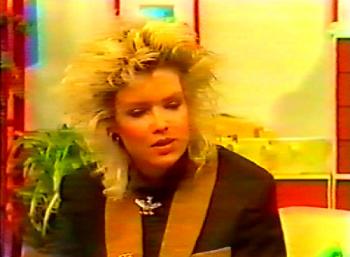 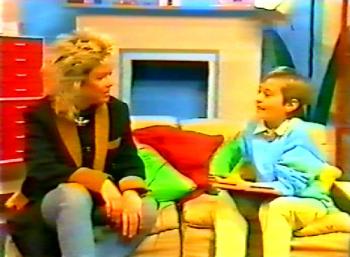