Interview with Kim Wilde on the occasion of the release of her new single and video 'Say you really want me'.

And it's to accompany your song 'Say you really want me'. Tell us a bit about that.
Well, it's my new single, it's currently out in America as well, and it's number 40 or something over there right now, it went up last night quite nicely, so hopefully it will do that well over here.

You've just come up from the States, didn't you?
Um, not just. But I have been there a lot, 'Hangin' on' did incredibly well, so we're hoping 'Say you really want me' is gonna consolidate that success. It's the first time I've had real success in America in the six years that I've been making records. Very exciting.

Do you travel all over the States, or particular areas?
Well, I was all over the place, every state doing radio promotion. I worked really hard with 'Hangin' on', it didn't just happen. And I just spent a lot of time over there, but recently I've been spending a lot of time here doing various TV's for this single and also the Elvis Presley tribute show which is on next week, which is great fun.

Yeah, you got involved with that, haven't you? Three songs?
Yeah, that was fabulous, working with loads of different people, singing Elvis songs in a tribute to Elvis Presley.

Good that you got involved with that, because a lot of people now, young people particularly, won't be certain as to how big Elvis was. I'm sure you grew up with your dad telling you how great he was, what a great singer he was.
Oh yeah, a great singer, with great songs, and a great time in rock history. You know, the beginning of it, virtually.

Do you still listen to Elvis Presley songs?
Oh yeah, I still listen to Elvis Presley songs and not only is he brilliant, but the people he surrounded himself with, Scotty Moore and Bill Black, his musicians, so he was a real innovator of his time, you know. And some of his records were the first records where he used things like echo and all kinds of effects on guitars that have mashed people's ears at the time, it's stuff that we take for granted now, because it's pretty run of the mill, but at the time it was quite phenomenal.

Sounds as though it influenced you quite a lot.
Well yeah, he's much loved in our family. We all love him.

You're making a few friends now yourself, aren't you? You mentioned America, they love you over there, don't they?
I hope so... I haven't been back there since I got to number one... So I'm quite looking forward to doing that. That'll be fun.

You're not like Samantha Fox, who came to our programme last week and said she's huge down under and big in Japan.
Yes... It's a very good quote, Sam, isn't it? No, she's very successful everywhere, in fact we're both big everywhere. (Laughs)

Kim's video performance has been banned by one TV programme fpr being too raunchy for kids. And it's even too wild for TVAM, Kim Wilde.
Oh you're kidding. You mean you drive me all the way down here and you're not gonna put a bit on the telly? (Laughs)

We've all been watching it subliminary.
...It'll wake everybody up!

What's it all about? Is it all a lot of fuss about nowt, or do you think it's a bit naughty?
We didn't make it on purpose to get it banned or anything, it hasn't really been banned except for one kids programme, I think it will be played, it will be on the box in a few weeks' time. It's not like the same controversy that surrounded the George Michael thing, it's not meant to either. I feel I have got some good press out of it, and it is quite steamy.

It's a bit raunchy, isn't it?
Yeah... But it would be quite boring if pop music started becoming incredibly safe and santized.

How do you answer your critics then, who say you deliberately go out to make a raunchy video, to get it banned, so that everybody wants to see it and it goes to number one?
Well, er, I don't know if that's a criticism really or a compliment. If you achieve it and do it well, then I'd say, yes!

Obviously, we're all being deadly serious right now, aren't we, crikey, but...
It's a bit of fun, really, it wasn't meant to be taken so seriously.

But I guess it's the climate now, isn't it Kim? The climate nowadays is that people are just watching it a bit, being a bit careful because of the feeling they've got enormous responsibilities with the people that watch them and buy their songs?
I think everybody has an enormous responsibility to their kids, you know. And when the kids TV show says that they didn't want the video in the program, I thought, okay, fine. If it's too naughty for the nine-year-olds, I'm with that. If that's what they feel. Except personally I don't agree with that. I think there's far more disturbing things that are televised than me having a good time on a video. And it isn't an obscene video at all, it's about having fun and enjoying pop music and enjoying a video as well.

You've got two younger sisters as well, haven't you? I presume you wouldn't...
Roxanne is eight and my brother's seven and they've watched it and the way they see it is that Kim is on there and I look nice and I look like I'm having fun and... It's not in their minds that it's bad. It's probably in your mind.

Tell us about the song.
Well, 'Say you really want me' I recorded about a year ago for the soundtrack of 'Running Scared', which is kindof a sleeping track on the album. And I've just decided to release it. It's doing well in America, and what with the video and everything it's all going nicely!

I've got an idea. Shall we listen?
And the video!

Well, er...  We've actually edited your video so carefully you won't sense it happening. You might see a lot of pictures of young children instead. But it's our interpretation of your video (laughs).  What a stupid lie! (Laughs) ('Say you really want me' played over pictures of children who are celebrating their birthday on the day.) 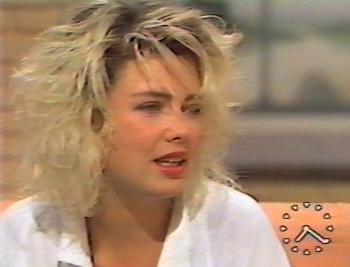 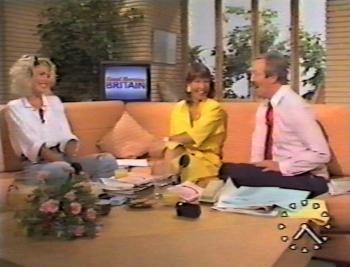 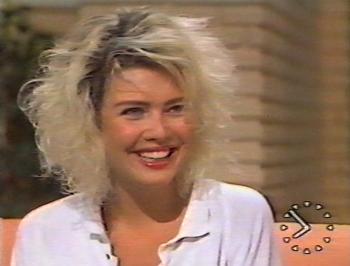 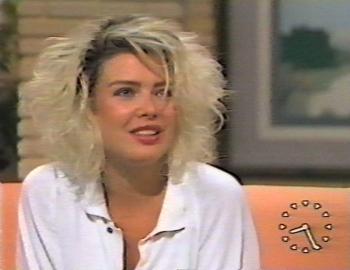 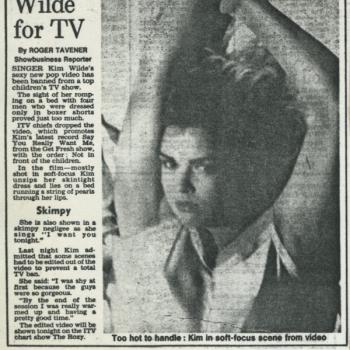