How's it been going?
It's been going great. Really good, I've been having such fun. Really, last night was really good fun.

How did it all come about? I would imagine it's the chance of a lifetime.
When I got these dates at Wembley I phoned up Michael and I said 'I've got seven nights at Wembley. How would you feel about doing it with me? And he was very nice. He said 'As long as you put me on top of the bill I don't mind doing it.' I thought it was a bit naff but you know, I thought 'okay'...
.... No but basically we just got a phonecall from the promotor, well, one of the promotors who's doing it asking if I was interested. Said that there were some other bands up for it, so I didn't really expect to get it, because I'm not exactly renowned for my touring in this country, although I've done quite a lot in Europe. About a week later they asked us to send stuff to his management in America, and about a week after that we got the phonecall saying we'd like Kim to do the tour. And I was absolutely stunned!

It must have been difficult to believe I would have thought?
It was (laughs).

So is this, again, another experience entirely?
Yes it is. Although in France I've done quite a few big festivals, and quite a lot of people turn up at those, big festivals with lots of acts and about 100,000 people, so I wasn't totally new to standing in front of that many people but, you know, I've learned from experience on this tour. I've done about 17 or 18 gigs and each one has had me feeling a lot better and helped me, primed me up for Wembley. It's quite something standing there, looking at all those people.

There have been reports that you and he haven't seen too much of eachother on this tour. Is that true?
Well I haven't seen a tremendous amount of him. I have met him, you know, but I couldn't say that I know him intimately. I watch him most nights, they don't mind if I go and watch him in the wings so I do that.

He's a very shy, naturally shy man, isn't he?
I think so, yeah. When I was introduced to him that's the impression I got. But overwhelmingly gentle. And I noticed that when... I don't know if I'm giving anything away now but he has a very good communication with children. Gentle with them. If anyone's got their kids with them like his band or his manager's kids are over -

I can never get over the contrast. Backstage: shy, young man. Likes playing with children, toys, reclusive and so on, and then that character emerges on stage: aggressive, so sure of himself it's unbelievable, a perfectionist; can you reconcile those two characters?
I can in a way, because of the way I am on stage and the person I am off stage. The way that people react to that who know me. There is quite a big difference to the person that I am publicly. Not here talking to you, you know, those videos that I make and various other aspects of my career, which really sometimes seems to... they're direct opposites to that real person inside me.

It has been said of Michael Jackson that he only comes alive on stage. That that's his life. That's what he lives for.
Well, I suppose on this tour that's all he lives for, of course you're on tour, you're motivated towards that time on stage. Being a performer of his caliber I wouldn't be at all surprised. You wanna live for that moment.

For all those who want to be like Michael Jackson there's one bit of bad news, isn't there? You've got to work so hard for that kind of dancing perfection. How much training does he do?
I really don't know. I think he must train during every day that he has off. I don't think he's whizzing 'round, sightseeing all the time.

What's the crowd like with you? I bet they've warmed to you as well, haven't they?
Yes, well, they're really good, considering most of them are there to see Michael Jackson, they're really nice to me. They're sort of welcoming, especially a really warm reaction at Wembley last night, I was absolutely chuffed.

A lot of the pictures from the new video - because there is a new single out now as well isn't there - did they not come from the Jackson concerts in Germany, am I right?
Yeah, we shot the video in Berlin. We did the gig outside the Reichtag along the wall, and we did a video there. The little clips from the performance...

That was great. You're big in Berlin, aren't you?
Uh, yes. Germany is a good place for me. Europe generally is a very happening place for me.

Also earning millions, deservedly, is Kim Wilde.
Millions? Please! I've been reading these lovely reports about me making all this lovely dosh but of course it's not quite true. 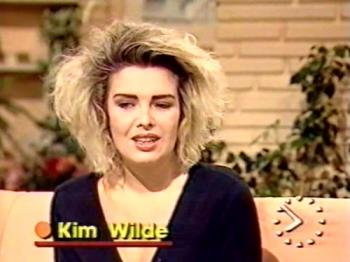 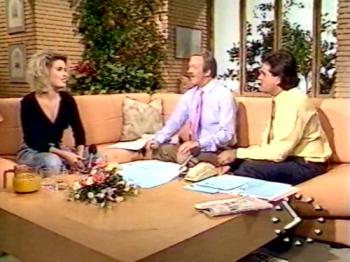 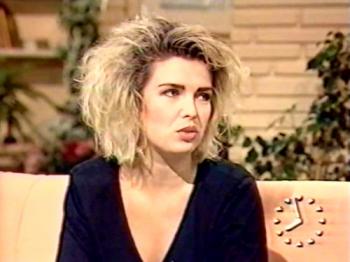 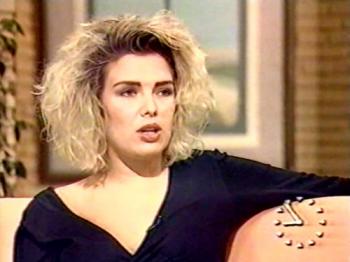