Kim is interviewed by the two presenters of the show, Richard Madeley and Judy Finnigan. After that, she does a lipsynch performance of 'It's here' backed by a four-piece band. She is dressed in a black top and a black miniskirt.

Your hair isn't as blond as it was once.
No (laughs).

Is that your real colour?
Um... It's kindof my real colour. The last year I spent recording and writing my album and just not really worrying about make-up and hair and stuff like that. And I really got to quite like the way that it's gone.

You're 29. You've been in the business a long time now, 10 years, isn't it. You were very young when you started out. Do you feel very different now? I wonder if it's difficult for female rockstars to keep in control of themselves, their business, their own destiny, even the way they look.
I've been in the sort of unique situation working with my family and we have sort of a very tight team work with them and some other people and that sort of whole structure has really helped me through the years to keep things going, keep it steady, keep it organised.

So your dad's really involved, Marty Wilde, is he?
He is, actually. Not so much now as he used to be but my mother certainly is involved.

Going back, then, to when you first made it big, was your dad totally behind you? Did he say, 'yeah, be a rockstar, I had a great time, you'll have a great time too, or did he have a lot of concerns about what you were going into?
He certainly wasn't against it, I think there's a few misconceptions about the fact that he's pleaded with me 'Please, go to school'. He was very interested in me pursuing my education but he was always really encouraging my music. He's always done that, you know, because he loves music. It was a gift that he wanted to encourage with Ricky and I.

I suppose perhaps it was a mixed blessing in some ways because when you started out, I seem to remember a lot of interviews you did at the time, the obvious question was 'don't you think you will be in your dad's shadow, will you ever be as successful as he was'. All that is way behind you now, you're a star in your own right, but looking back now, was that a bit of a problem for you? Did you think 'I've got to measure up to dad's success'?
I must admit nearly ten years ago it's quite nice not having to deal with that approach from the media and from journalists. But I've always been very proud to be associated with him, you know. In fact I find it easier to talk about him now than I did then. I was young and I was independent and I wanted to strike out on my own even though I was singing my dad's and my brother's songs, I had this idea that I wanted to be cool and have credibility and those things that you have to earn.

What about your mum, because she's the one that does keep out of the limelight but I get the impression that you're very close to her. Are you?
Yeah, she came up with me this morning, she's gone off to see my nan, who's living in Hyton, and she's very involved in the business. She's a very keen businesswoman, very informed, and a great friend.

So you're lucky really. You've got that very solid bedrock of family to fall back on.
Absolutely, it's really... The whole unity of our setup is I think a strong contributory factor - Wow.. (gasps) - for me to still be around, really.

Have you been through any bad patches? A lot of rock stars, I don't mean in terms of falling record sales or something, but, lack of confidence, feeling not quite in control of your own destiny?
I've never felt not in control of my destiny, but I have had sortof confidence crises really.

Have you?
I think everyone does, don't they?

Yes...
...And I'm no exception. There were times when I would wake up in the morning and sort of wonder what it was all about, but I think everybody does that, you know.

But does that mean that sometimes you wake up and thought 'I'd rather do something else'?
Well maybe in the bad times, 'Well I don't like it anyway' and 'I don't wanna be here anyway'. Of course when it goes really well you think 'Yeah I'm really pleased I'm here'. 'cos I really love music, that's the base line really for me. I write it, I produce it, I sing it, and I'm still doing it. I have a strong commitment to music otherwise I wouldn't still be around doing it. I'm not really doing anything else, I haven't gone off and made films or... I've really kept on course. That's not to say I won't make a film of course!

You had a really strong career boost when you went on tour with Michael Jackson, didn't you? You've only met him once during the entire tour.
That's right, yes, shortly after I'd come off stage in Munich, and it was about two and a half weeks into the tour, and we were getting a lot of flak from the press, well he was actually, for not seeing me and snubbing me apparently, although I never felt that way. It was a very busy tour and I wasn't really there when I was not on stage, I was off doing promotion on the 'Close' album. And he was always surrounded by so much security so it wasn't really congesive to us to have coffee like this, you know.

What do you think of him? Do you like him?
I really liked him, yeah, he was his own person and he had his own way of being a human being. I really admire people who are individual. I mean, whether you like it or not, or do it yourself, I really respect people who have their own way. They go their own way and they take the consequences. 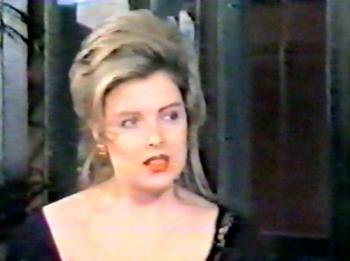 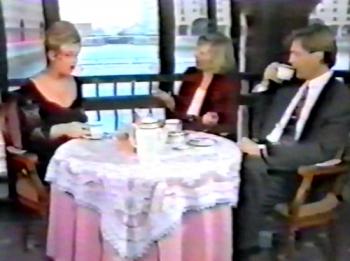 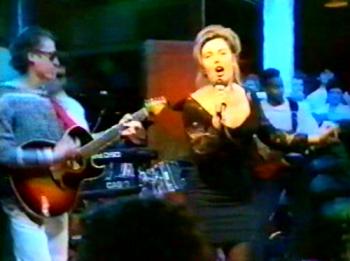 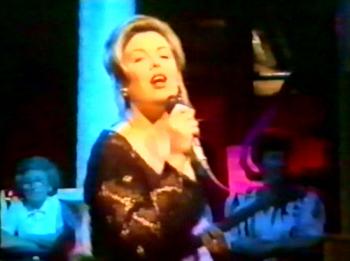