In a special on the French music channel MCM Kim is interviewed for about an hour by presented Patrick Willard. A few videos are also shown, including 'Million miles away' (by Kim), 'Paradoxale systeme' (Laurent Voulzy) and a video by French band Niagara.

You are coming directly from Japan?
Yes, almost.

What were you doing in Japan?
I went to the Grand Prix, met Nigel Mansell and Renault, doing television there, which is gonna be in France in December. So I went over there for a few days. It was really, very interesting. I had a good time.

What did you do there?
I got to sit in his car.

With him? It's too small, no?
Absolutely, yeah, just... he showed me around the garage. I met Bernard Dudot who designed the engine and Frank Williams whose team it is and... I met everybody, it was really good.

Why did they choose you, why did you choose to go there?
I was asked to go. There were comparisons with Nigel Mansell being a British person working with a French team, the Renault team, and the analogy was that I also work with the French very well, so there was a parallel there. And also Nigel Mansell was a fan of me. (laughs)

So is there a love story in the air?
No (laughs). It not like that. Obviously he has a family, he's married... Doesn't count in France, right? You told me that before, you told me.

In England it never happens? A married man with a lady? An unmarried lady?
I guess it does happen but I wouldn't really be interested myself. I'm very oldfashioned about these things.

(Music video for 'Million miles away' is shown)

What do you think? Do you like to see yourself on television?
Well, I had a lot of fun making that video with the model. His name is Jason. Sometimes work isn't so hard to do when you're doing it with someone like that.

So you have a new album, which came out a few months ago. How do you feel about it? Is it a personal album?
Well, I worked very hard on the album, on the songwriting and I did the best that I could. I always do that when I make an album. I just put everything into it. That's all I can say. I'm very proud of it. It's worked very well for me, mostly in Europe and the UK, and it's very successful in Japan now, so I'm very, very happy.

How long did you work on it?
We worked... most of the year writing and the last three or four months recording. We recorded some of it in Los Angeles with Rick Nowels, we made Love is Holy and two other songs and the rest we made in our studio in Knebworth in Hertfordshire, my own recording studio, that's where I live. Most of the year I spent writing, which was great. I really love writing songs. I worked together with a lot of different writers. It's a very good way to spend the day.

Does it mean that you are never satisfied with your writing and that you always need to add another session?
I find songwriting easy to do. In the years that have gone by, I've been writing for about seven years now. Now I have a lot of confidence to write songs. I find it easier to do them now.

But are you satisfied easily?
No, I'm not.

A hardworking girl...
Yeah, I'm a bit of a perfectionist but I'm not too selfdestructive on that.

So you try to be the best
Yes, always, on everything. So whether I'm cleaning the house...

You clean the house?
Yes.

Do you have an apron and everything?
No, I should get an apron. Anything I do I try to do the best I can. I really try hard to do that.

(Myriam Callas does the gossip column)

(Music video for 'Paradoxale systeme' by Laurent Voulzy is shown)

He's a good friend of yours. Even before meeting you he had a song about you.
Yeah... and then he sent the song to our studio and I listened to it with my brother and we really liked it. I've been a big fan eversince of him and his music.

He has a lot of talent... for a Frenchman.
He's very talented in any sense. In any regard, you know.

Did he ever propose to write songs for you?
Yeah, we're gonna write some songs together. That is our project.

He's very slow.
He is, but he gets things right. That's the way he works and it works well for him. But I would love to write some songs with him. I'd love to write a song with him and sing in French. That would be good.

You work very much with your family. Especially on this album, you have your sister singing with you?
Yeah, Roxanne.

For the first time?
For the first time. She's thirteen. She did some backing vocals on a song I wrote with my guitarist. And also I always work with my brother Ricky, who is my producer and composer. So we're a team.

It's the Wilde mafia.
Oui (laughs).

Do you fight a lot?
No. I don't fight with anyone. It's not in my nature.

Too good to be true.
I'm not a fighter.

When you have a discussion with your brother, who wins?
It depends. He's very strong about his direction, he is very single-minded. He has very positive ideas about things. Usually I go along with that but he will listen to me.

(Music video for 'Love me do' by the Beatles is shown)

When you were young, did you listen to the Beatles or were they already finished?
They were being played a lot [at home] because I was born in 1960 and I was 3 or 4 years old when I started to understand the music. They were very influential.

How long have they been married?
33 years.

Do you have any memories of seeing your parents singing?
Um... Together? As I grew up I watched my father sing live very often. And when I was sixteen my mother and I, we joined him and did backing vocals for a little while.

So that's how you started in the business?
Well before that, we were in the studio quite a lot, trying out different songs, you know. So I've been in a recording studio since I was twelve.

When did you find out you wanted to have this career?
Well, I knew when I was a very little child.

When you're a little child it is just a dream. When did you know for sure that you wanted to be a singer?
When I was a little child.

Oh really? À quel age? Five years?
Oui. I asked the same question to Nigel Mansell. He said from when he was eight years old he knew he was going to be a Formula 1 driver. So I think a lot of children know what they want to be, very young. Children are very wise and I think they know. A lot of them know what they want. That's why I have a great respect for children because I never think of them as being half-witted or stupid.

Your first hit was 'Kids in America'. That's a lucky choice, wasn't it?
It was a song written for me by my brother and my father, and it was a huge hit and I really wasn't expecting it. Suddenly I was travelling all over Europe, places I'd never been before. I couldn't take it all in. It took me years to get used to the fact that I was famous. Sometimes I'm still not used to it. You never get used to it really.

Why don't you like to be a star? You don't think you are one?
I enjoy it sometimes but I just never consider myself in that sense. I don't consider myself as a star. I just remember too much about how I was when I was at school, and how I was when I was at college. I have the same friends that I had in school. My life actually changed very little. I still feel like the person I was before I was famous. That's the way I feel.

Because you don't like being hassled by fans?
That part of it is something I can enjoy. There's a lot about being famous and being called a star that I enjoy but I don't live that dream. It's something that is separate, part of my job. And then I have my private life and that is really me.

And the last one?
I think 'You keep me hangin' on', because it was such fun.

Your version was very good.
Thank you.

Are you going to tour soon?
Peut-être en Decembre. But next year I have my Greatest Hits, it's being released in the spring. And I'm doing a lot of touring at that time with that album.

Best of already?
Yeah, it's been twelve years now.

You're gonna make a lot of money.
Maybe.

What do you do with your money? Spend it on clothes?
I don't spend a lot on clothes. I pay off my mortgage.

Even stars have mortgage to pay, huh?
Oui.

(Music video for 'Love is holy' is shown)

Do you believe that love is holy?
Yes.

L'album s'appelle 'Love Is'. Love is what?
Love is everything. 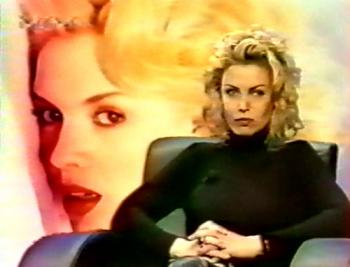 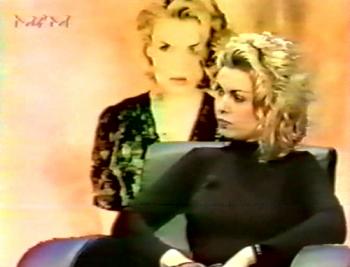 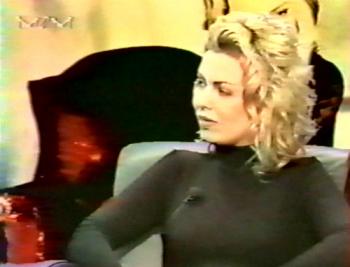 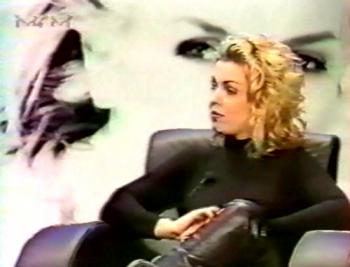 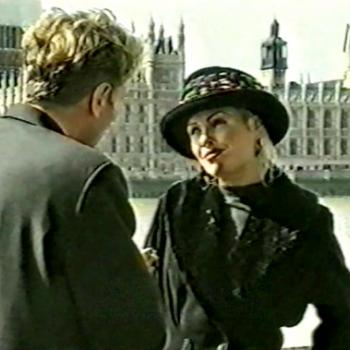 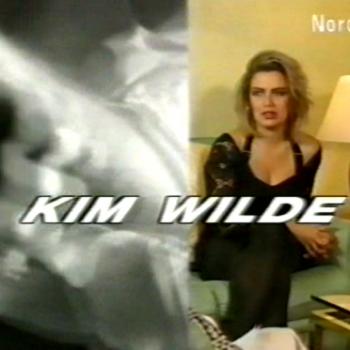 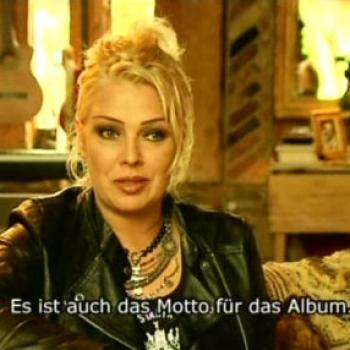 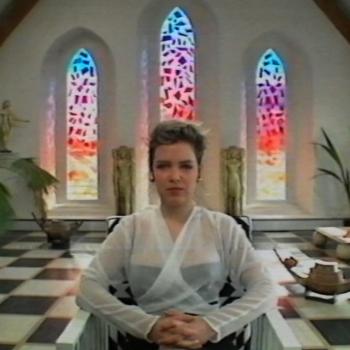