Interview with Kim Wilde about her new job as mother of Tommy in the musical 'Tommy'. Kim is interviewed on location in a rehearsal studio, where she is sitting on a metal chair. The female presenter is seated on a garbage can.

Kim Wilde released her first single 15 years ago and it sounded like this:
(clip of music video for 'Kids in America' shown)
Since then she's released over 30 singles, 10 albums, travelled all over the world and is about to make her West End debut in the rock musical 'Tommy'. And I've come here in this beautiful set to find out more about it.

So Kim, congratulations on the role to start with. How did it all come about?
It was about three months ago. I think it was about November, and the album had just come out, and I was promoting that. We were sent through the script. And I thought 'Wow, that's really interesting', because I loved 'Tommy' as a kid, I had the album in the house when I was 13 or 12 and I loved that. So I thought 'This looks really interesting'. And I read it, and I heard the music and I thought 'Wow, this is gotta be done. So I went to the audition, which was very scary because I'd never been to an audition before...

What was the audition like, describe the audition, what did you have to do?
It was at a studio in Covent Garden, and Pete Townshend was there, director Des McAnuff, they all sat on tables a bit like these tables over here, and I basically had to sing the songs that Mrs. Walker sings. I play Tommy's mum, Mrs. Walker. And I had to do some reading, dramatic reading which I'd never done. It was pretty scary.

(Music video for 'This I swear' shown)
I'm still making records, I've got my record out and I'll still be recording in the coming years so I'm not turning my back on my recording career at all. And actually I found out I got the part for Tommy when I was making that video, so... good memories. 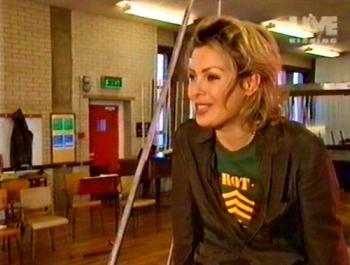 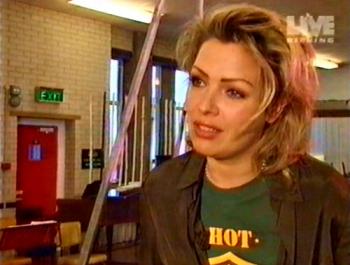