Interview with Kim Wilde, starting with a video of Kim's 1981 performance of 'Kids in America' in the German music programme Musikladen.

I never really thought about the future in 1981. I was really happy that I was making records and just taking each day as it came. So I didn't really think about the future. I did worry about it a lot, though, I used to worry what unemployed popstars did, that was a big worry for me for a long time.

The initial hit, the 'Kids in America' time, that was really great, I was just 21, I was having a great time. After about five or six years when things got a bit tough, it was tough growing up in public and it was tough taking the knocks and experiencing my first taste of failure, I suppose. Or what was perceived as failure. Records that didn't do so well, albums that didn't sell, my career sort of winding down a bit. So those were hard pills to swallow initially. But you know, my life in the last five years are amongst the happiest years in my life.

(Music video for 'You keep me hangin' on')

My attitudes as I've gotten older have changed. If I see something and I want it I go for it, I don't think 'well I'll never be able to do that'.

(Music video for 'This I swear')

'Now & forever' is a project that's begun right on the back end of the greatest hits project, which took forever and I was doing tours and promoting that and it was doing really well and it was obviously very retrospective. And at the end of it, after about a two, three year period which it took, I was getting into all kinds of different kinds of music, much more soul-orientated. I've always been a bit of a soul girl, but I've also been a bit of a rock chick and it's a bit of a dilemma really.

On top of a music career, acting and the occasional television presenting, Kim would like to write a book.
I kind of always written down things like dreams and just about life really. Not so much, you know, it won't be kiss and tell about the time Steve Strange tried to snog me or that night when I went home with Adam Ant and in the end he made me coffee, so it won't be like that... (laughs) Though I might throw in a few of those, but it would be more to do with my life and how I see life and... I don't know. I've got a few ideas at the moment which I'm mulling around.

'Now and forever' is an album of music that I felt totally right in doing. I feel very happy in the soul and dance arena and that's where I intend to stay. And if I can continue to do that I will, irrespective of how well it goes down. It sounds a bit arrogant, doesn't it? But I've always got on with doing what I wanted to do, irrespective of what happened. So I should continue to do that. 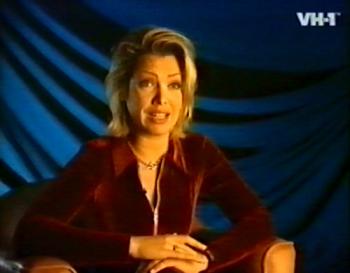 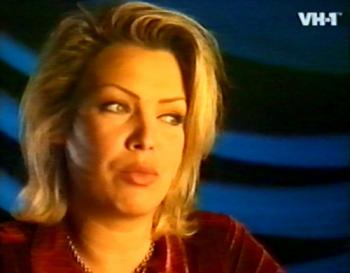